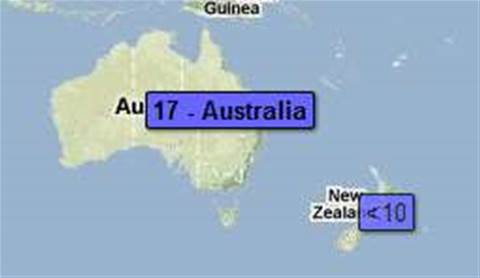 In an age of Wikileaks, online whistle blowers and a greater move towards open transparency, Google has created an interactive global map that now lists official requests from governments around the world for data about users, and requests to take down Internet content.

For Australia, 172 requests in total were fielded to Google by the Australian Labor Party in 2009 between the dates of July 1, 2009 and December 31, 2009.  Lucinda Barlow, head of corporate communications for Google Australia, told us that a government 'data request' refers specifically to requests by local and federal police for information about users using Google's services and products.

From those 172, just 17 were requests to take down specific Internet content. For each of these 17 requests, Google only complied with the Australian government a little more than half the time or 52.9%. But according to Barlow, there could be good reason for this. "It could be the request is not specific enough or does not provide a URL", she said.

It has to also meet the spirit of the law, said Barlow, adding that Google is determined to protect the privacy of its users and will not just release data without appropriate takedown protocols and rules in place. Barlow added that "the request need to be quite formal...and issued under the appropriate (local) laws."

"Historically, information like this has not been broadly available. We hope this tool will be helpful in discussions about the appropriate scope and authority of government requests and that other companies will make similar disclosures", said Barlow.

Requested content removals included a blog, search engine queries and 14 YouTube videos. And if all this sounds like a case of big brother, Google make no apologies for releasing the information.  "We're doing this because we believe that transparency will give people insight into these kinds of government actions", Barlow told us.

To illustrate the types of requests Google receives, Barlow provided a list "theoretical global examples", including some which seem likely to raise concerns for freedom of speech advocates: "A government asks us to remove a video from YouTube portraying a national hero in a negative light." Another "abstract" example provided by Barlow were "government requests that we remove content from local Search results that portrays their policies or history in a negative light."

According to Google's data, Brazil's government leads the world in the number of requests it issues to Google regarding information on users (over criminal matters), with 3663 requests for information about users, while there were 3580 requests from the USA and 1166 from the UK. When it comes to requests to remove Internet content, Germany tops the list with 188 requests, some distance ahead of Australia on just 17.

And not surprisingly, given recent reports about hacking incidents involving Google in China, request details for China are not provided by Google on the interactive map. Instead, a red question mark hovers over the country. Is there something Google isn't telling us?

A Google spokesperson offered to shed some further light on the China matter, telling us the reasoning behind the lack of Chinese request data is "because Chinese officials consider censorship demands to be state secrets, so we cannot disclose that information at this time."

For all their power to reveal, the provided statistics are not perfect, something Google is happy to acknowledge. The company has stated in a related FAQ, that the data may not inlcude every request issued: for example, those government agencies that use web forms to issue their requests or for those countries with less than 10 requests. In examples such as these, the data is not yet available. Unfortunately, Barlow couldn't tell us how often the data would be updated in future reports or if it will be an ongoing project.