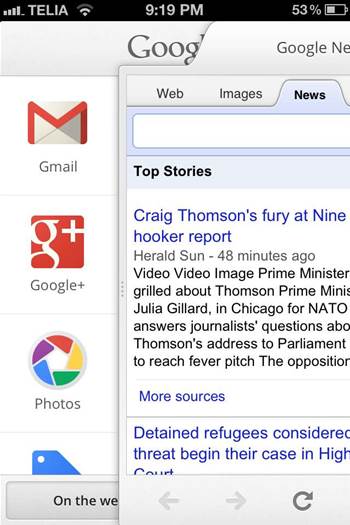 Apps within Search and lots of slick sliding.

Google has overhauled its iOS Google Search app, giving it the closest thing to a full browser without actually being one.

The app, released Wednesday, offers a fast entry point to key Google apps on the web and the device, bringing the user experience a little closer to desktop search, and partially sidestepping the constraint of not having the multi-window capability of Apple's default Safari browser.

Given the speculated cost to Google of keeping its place as the default search engine on Safari, the app may help the search giant win users away from Safari entirely or, at worst, encourage them to stay within its app a little longer.

A single tab lets the user slide between a new webpage and the original search page. Google developed a similar page switching feature for its Chrome browser on Ice Cream Sandwich Android devices.

The slide action and single tab also lets the user move easier between its tiled apps menu -- including for example Google+, Reader, Gmail, Calendar, Translate --  and whatever app is in use.

In other words, in some cases two apps can be open at once and there’s a central place to return to without having to leave the Search app.

There’s also an ‘On my iPhone’ panel that can be used to launch installed apps, such as Earth or Translate, as well as highlight Google apps that might not be installed.

The app also matches Apple’s mobile Safari web page text search, accessible in the pane at the top of the browser. Google's text search sits behind an opaque magnifying glass icon that appears at the bottom of the screen when a web page is opened within the app.

Earlier this month, US-based Macquarie Equities Research indicated that Google was “likely” to release its Chrome browser for Apple iOS devices by the end of 2012. It's unclear if this is the 'new' iOS browser the firm was referring to.