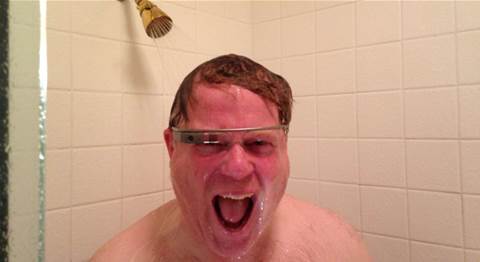 Google Glass as worn by renowned tech blogger Rob Scoble in the shower.

Google has ended sales of its first generation Glass spectacles computing device, promising to launch future models of the controversial wearable in the future.

First reported by the BBC, Google will no longer make or sell Glass, which had retailed in the United States and the UK under the explorer program for developers, for US$1500 (A$1827.50) per device since 2013.

The explorer program will also cease. While Google told the BBC there will be new models of Glass, it did not say when these would be available.

The design team behind the wearable is now reporting to the chief executive of home automation business Nest. Google purchased Nest last year.

Glass was seen as an innovative wearable that presented information from Google web services in the user's field of view. It was also deemed to be controversial and voyeuristic as it had a camera function for still pictures and videos, and Glass was banned from some restaurants.

Several Glass wearers were attacked in bars and other places by patrons who objected to the device.

Google itself realised the device could be construed as privacy invasive, and issued guidelines to participants in its explorer program, asking users not to be "creepy or rude" when wearing Glass.

Glass was made for Google by Taiwanese original equipment manufacturer Foxconn, and contained a dual core Texas Instruments OMAP processor, two gigabytes of memory, 16GB of storage and a heads-up display in the lenses with 640 by 360 pixel resolution.

The device can capture still images at five megapixel resolution and video at 720p.