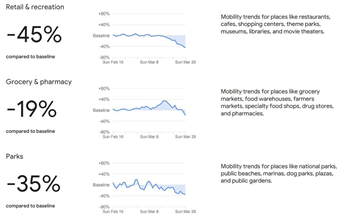 Google has published a set of reports using the location data it collects from users via its services and software such as Maps to provide insights into how COVID-19 movement restrictions worldwide are affecting communities' mobility.

Compared to a median baseline during the five week period between January 3 and February 6 this year, Australians visted retail outlets and recreation places such as museums, libraries, restaurants and theme parks about 45 per cent less recently, the report summary suggests.

Grocery and pharmacy visits dropped by almost a fifth, and people went to parks and beaches just over a third less than usual.

Google's location data for public transport hubs fell by 58 per cent, and workplaces saw a drop by a third.

Most of the above metrics saw sharp falls during the second week of March, apart from grocery and pharmacy visits which spiked upwards by just under 40 per cent at that time, as people panic shopped .

The number of people staying at home is now 13 per cent higher than usual, Google's data suggests.

Australia begun restricting public movement last week to combat the spread of COVID-19, and is considering even more stringent rules to reduce people moving about.

New Zealand which went into complete lockdown two weeks ago has seen a much sharper drops in mobility.

For example retail and recreation dropped by 91 per cent and workplaces mobility data is down by 59 per cent compared to the first part of the year.

Italy has been hit hard by COVID-19 and was the second country after China to enter as strict population lockdown.

Google's location data for Italy show even steeper declines in mobility, retail and outdoors visits, by 94, 85 and 90 per cent respectively.

Google's Maps data collected from devices on which users run the company's services indicate that there are possibly some differing behavioural patterns across Australia.

Whereas mobility data indicate that grocery shopping visits fell by a fifth across the nation, the Australian Capital Territory, which includes Canberra, saw only a three per cent drop in that same category.

Going outdoors to parks and beaches is down by a third nationwide, but not in ACT where it is  up by 38 per cent.

The data should be taken with a pinch of salt however, and not be used for medical purposes or as guidance for personal travel plans, Google warned.

Although the online giant provided a breakdown of the figures for all Australia's states, Google does not recommend that the data is used to compare changes between regions that have different characteristics such as rural versus urban areas.

This is because location accuracy and the understanding of categorised places vary from region to region Google said.

For the same reason, Google cautions against using the reports to compare countries with one another.

Google said the reports are created using anonymised data sets from users who have the Location History setting turned on.

The setting is off by default, and can be disabled in users Google Accounts. Location history data can also be deleted directly from users' time lines.

Google said it anonymises the data with differential privacy, a technique that adds noise to the information gathered that in turn prevents the identification of individuals while allowing researchers to get high-quality results.