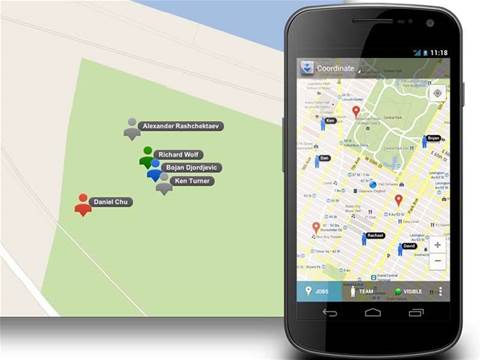 Google has unveiled a cloud-based mapping service to improve businesses’ management of mobile and field workers.

The Australian-grown Maps Coordinate web service allows fleet managers to track mobile workers’ movements and assign tasks to them based on location.

Instructions are delivered to workers through a native app on their Android devices.

The app allows users to determine when they are tracked, and presents real-time information about their teammates and tasks on the familiar Google Maps interface.

“Obviously iOS is definitely on the radar for us to invest in,” he said.

“It’s at the top of the list ... We’re definitely wanting to make sure that we get the Android version right [first].”

Fleet managers may customise jobs before assigning them to mobile workers, to request the workers to input “whatever textual information” the organisation requires.

Australian organisations in those sectors had expressed interest in Google Maps Coordinate during early discussions, he said.

“Many organisations have to capture information when they’re out in the field, whether it’s a cable guy coming to install something, around customer satisfaction, [or] canvassing for votes,” Chu said.

“Today, many organisations end up using a pad and pen and jot it down and once they get back to headquarters, it’s entered into the system.

Chu said location data from Google Maps Coordinate would be stored on Google’s cloud infrastructure but was unable to comment on whether that involved on- or off-shore data centres.

He noted that the service was built with privacy and security in mind, with all location data fully encrypted and sent through the SSL web protocol.

“It’s paramount for us to respect the privacy of [a customer’s] data,” he said.

“That data is only for the use of the customer and it is not accessible to Google.”

Chu said Google Maps Coordinate would be delivered with a suite of APIs – web services that “allow you to programmatically create, update and query a job”.

He expected the APIs to allow organisations to easily integrate any data they collected through Google Maps Coordinate with existing customer relationship management systems and other business applications.

“There’s already been a lot of queries around integration of this; the intention is for the APIs to facilitate that,” he said.

“Web services are designed to be extremely easy to use. It’s literally just a HTTP request to access that data so it’s intended to be very easy to integrate with [existing] systems.”

Chu acknowledged that Coordinate could be marketed through third-party partnerships with integrators or manufacturers.

But he said Google planned to sell the product through its direct sales force and reseller partners initially.

The service costs $US15 per user, per month under introductory pricing, until September.

“In the market as we perceive it, it seems like there’s lots of organisations that haven’t invested [in field force automation] for whatever reason,” Chu said.

“We feel that one of the reasons is just having something that’s easy to deploy.

“Our goal is to really grow that market. It’s not to flip those [existing users], but more to address unreached folks that have these mobile teams.”

Chu highlighted insurance claims teams as a potential use case for Google Maps Coordinate, but was not aware of any discussions with NRMA.