Google fires back at Amazon, Apple with tablet 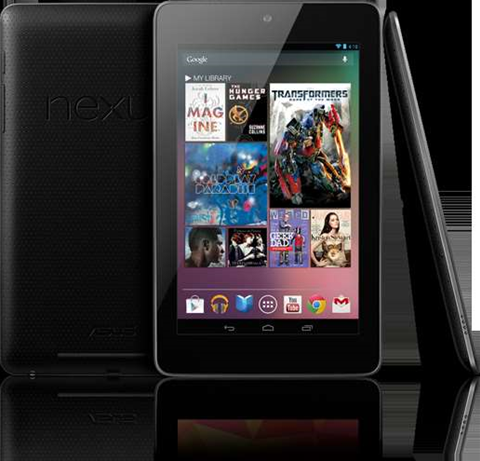 Analysis: Is the Nexus 7 enough?

Google's new tablet indicates the search giant's hopes to replicate its smartphone success in a hotly contested market now dominated by Amazon and Apple, according to analysts.

Google's maiden entry in the tablet market, which will also see the advent of Microsoft's Surface this year, could also help accelerate development of tablet-specific applications for its Android operating software — a key factor that has helped popularise Apple's iPad.

The Nexus 7 tablet, built by and co-branded with Taiwan's Asus, was one of several gadgets unveiled at its annual developers' conference on Wednesday, as the company dips its toe into the intensively competitive consumer arena.

The announcement of the new tablet comes a month after Google completed the $12.5 billion acquisition of its own hardware manufacturer, smartphone maker Motorola Mobility. But Motorola, which Google has said will run as a separate business, was absent from most the new products and services showcased at the event.

Google co-founder Sergey Brin demonstrated Google Glass, a futuristic-looking eye-glass-computer that can live-stream events, record, and perform computing tasks. The device will be available to US-based developers early next year for $US1500.

And it unveiled the Nexus Q — a $299 device with a built-in amplifier that lets users stream content from Android devices onto their TVs.

But the Nexus tablet hogged the spotlight. Sold initially only on the Google Play online store, its $AU249 price tag and 7-inch stature is aimed squarely at Amazon's Kindle Fire tablet, but the Nexus has a front-facing camera while Amazon's tablet does not.

Analysts consider the Fire a window into Amazon's trove of online content rather than an iPad rival, given the $539 base price tag Apple asks for a device with a "retina" display far outstrips competitors in terms of resolution.

Google can similarly use the Nexus 7 to connect to its own online offerings, which include YouTube and online content and apps store Google Play.

It will go after more cost-conscious users who might shun the pricier iPad.

"Nexus 7 is an ideal device for reading books. The form factor and weight are just right," said Chris Yerga, Google director of engineering for Android.

Google said it will offer buyers of the Nexus 7 a $25 credit to spend at the Google Play store and it showed off several media-centric capabilities, such as a new magazine reading app.

"They all but called it a Kindle Fire killer. They're clearly gunning for that No. 2 spot behind Apple's iPad that is currently occupied by Kindle," said Altimeter Group analyst Chris Silva.

"But the con is they do not yet have a footprint in people's minds and wallets as the go-to place to purchase and consume media."

Google has partnered with smartphone makers to develop Nexus-banded smartphones for several years, providing a showcase product that delivers Google's ideal vision for a device based on its Android software.

Extending the Nexus concept to tablets should similarly establish a model that other hardware makers can emulate, resulting in a more a competitive and uniform line of Android tablets to market, analysts said.

Google's free Android software is the No. 1 operating system for smartphones, with about a million Android devices getting activated every day

The tablet's limited availability — executives said they had no plans yet to expand distribution beyond Google's own site — may curtail initial sales growth.

Google briefly sold a specially designed Android smartphone — the Nexus One — directly to consumers in 2010, but closed the online store after four months saying it had not lived up to expectations.

It also partnered with Samsung to manufacture the Galaxy Nexus, which has become more widely available through telcos and stores globally.

But it has struggled to compete with Apple's iPad in the market for tablets, largely because it lags far behind Apple and Amazon in terms of available content and tablet-specific applications, such as games.

Meanwhile, Apple has increasingly moved to reduce its dependency on Google services on its devices. Earlier this month it unveiled its own mapping software, which will replace Google Maps as the default mapping service in the next version of its mobile operating system.

And Amazon's Kindle Fire, while based on Google's open-source Android software, features a customized interface that does not use many Google services.

The Google services available through the updated 4.1 "Jelly Bean" version of Android operating system include "voice search" and others.

"That range of services will be the secret to stitching together this rag-tag fleet of Android gadgets into a platform that can compete with Apple for minutes of users' attention rather than premium device dollars," said Forrester analyst James McQuivey.

But it's the lack of "native" applications - software designed with a larger tablet in mind, rather than ported from smartphones - that is the Nexus' biggest impediment for now.

"Unless you have a strong app offering, for a consumer it is a piece of glass that does what a phone does on a larger screen," Carolina Milanesi, analyst at Gartner Research.