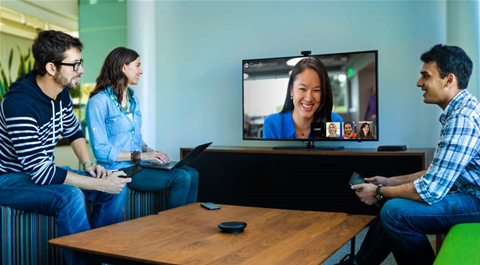 Google today unveiled a videoconferencing system for businesses in its latest effort to generate revenue from corporate customers.

Under a partnership with Asus, Hewlett-Packard and Dell, Google will offer a specialised version of its Chromebox PC bundled with videoconferencing gear, including a video camera and speakers.

The first Chromebox for meetings to be available is made by Asus and goes on sale in the US this week for US$999, Google said. Customers can also pay a US$250 annual service and management fee, though the first year is included in the product's sales price.

Google Australia was yet to provide details on local availability at the time of publication.

iTnews can confirm that one Australian customer is already using the solution. Retail giant Woolworths has been trialling several Chomebox videoconferencing units, acquired as part of a close working relationship between the two companies.

The product will put Google in competition against videoconferencing market leaders Cisco Systems and Polycom. Cisco in particular charges its high-end 'telepresence' equipment at a significant premium to the Google and Polycom solutions.

Google makes the vast majority of its revenue from advertising. But the search giant also sells services to corporate customers, including special versions of its online apps such as email and word processing (Google Apps), as well as Chromebook laptops aimed at business users.