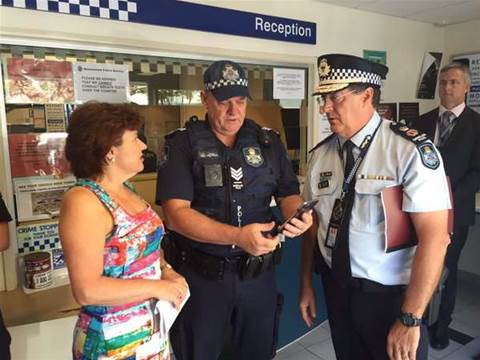 Police keep power to record when they want.

Queensland Police will hand out its first 300 body-worn video cameras to crime hotspot the Gold Coast following a $6 million commitment from the state government in the 2015 budget.

Chief commissioner Ian Stewart has had a change of heart towards the technology, which he previously panned as producing “robocops”, today claiming “many of the technological issues of concern in the past have been overcome”.

The Gold Coast implementation will act as a pilot ahead of a statewide rollout.

The QPS has made what an October industry briefing described as a “tactical purchase” of the initial 300 cameras, ahead of an open tender process expected to take place in the next few months that willl settle on a specific device for statewide distribution.

The force is also currently working on a digital evidence storage and management system to organise the torrent of incoming footage.

It has been contacted for detail of=n the first 300 devices.

The body-worn cameras will allow Gold Coast officers to film interactions with members of the public with the push of a button.

The devices will feature standard body-worn video functionality, such as a back-capture system that constantly records on a loop and automatically stores video for the 30 seconds before filming is activated by the officer.

Officers will be able to review footage using their smartphones and QLiTE-enabled tablets immediately, but will have to return the camera to a dock to upload the shift’s video to the central QPS repository.

Stewart said there would be 11 different classifications for the captured video that will determine the length of time it will be stored by the police.

He also confirmed that police will start and stop video recording at their own discretion, but will not be able to delete footage once it has been captured.

“I am backing my officers,” he said. “But the big question then will be why something wasn’t recorded if it indeed turns out to be something that should have been recorded at the time.

“I have a view of where this might head in the future, in terms of recording everything that occurs in a shift. That will be another step in the process and we will certainly consider it over time.”

However, the QPS is likely to have to go back to the government to ask for more funding beyond the $6 million already allocated before a statewide rollout can be achieved.

Stewart said he would put “every spare dollar I have got” towards the scheme, but would ultimately need to request more cash.

Police Minister Jo-Ann Miller said she would be “very happy” to take a submission to the state’s budget review committee.

NSW Police plans to spend $4 million rolling out 267 body-worn video cameras to 1000 of its own officers and has selected a ruggedised FireCam device, supported by M-View's Oncall wi-fi Pro streaming technology, and Fujitsu storage and palm-vein authentication.

South Australia recently allocated $5.9 million over four years to buy as many as 1000 devices.