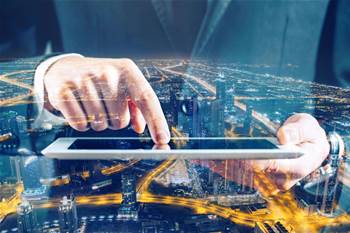 Acorns' entry is a reflection of rising interest in Australia from overseas financial technology companies, drawn by its heavy banking concentration and limited competition, consultants and financial advisors said.

The country's $348 million alternate finance lending market, which includes peer-to-peer lending and online lending, is the third-largest in Asia-Pacific, trailing China and Japan, after growing at 320 percent in 2015, according to research by accounting firm KPMG.

Rogers' firm is backing a Sydney-based online lending company called Prospa which has a referral tie-up with Australia's no.3 lender Westpac.

The government is supportive: it wants to develop Sydney as a fintech hub similar to Silicon Valley and has announced tax breaks for early-stage investments as well as a visa scheme for entrepreneurs to attract talent.

"If we'd thought of doing this at home, on our own, we'd not have reached where we are today," said Ranin Mendis, co-founder of LoanDolphin, an Australian auction platform where brokers and banks bid for consumers' home loans.

LoanDolphin, which is disrupting the mortgage broking industry, auctioned close to $17 million worth of home loans in the two months to end-March. By comparison, most brokers or lenders, on average, write about $4 million a month.

Australian banks are beefing up their own fintech operations in response to growing competition from digital rivals. Over a quarter of current banking industry revenue, or about $27 billion, is at risk from "digital disruptors", KPMG estimates.

However, the dominance of the four biggest Australian banks - National Australia Bank, Commonwealth Bank, Westpac and ANZ, which together control 80 percent of lending - means fintech start-ups face a tougher environment than elsewhere.

"A lot of the fintech discussion in Australia is about how these companies partner with the big four banks," Acorns' Lucas said.

"In the UK, they've taken a different approach where it's about innovation and disrupting the industry. A lot of fintechs are finding it difficult because of this government mentality to protect the four large banks."

On the plus side, Australia punches well above its weight in the financial services sector, with its funds management industry among the largest in the world, led by its $1.5 trillion pension funds which are actively seeking fintech partnerships to cut costs, industry players say.

In addition, the major banks have been mired in controversy around misconduct in their wealth management units, prompting players that offer digital or robo advice to slowly make inroads into the market.

"Two years ago when we spoke about fintech, Australians thought we were talking about some technology for surf boards," said Sid Sahgal, CEO of a global share investment platform Macrovue in which Australia's no.1 wealth manager, AMP Capital, recently invested $1 million.

"But now there is a huge amount of hype about fintech and people know what it really is."