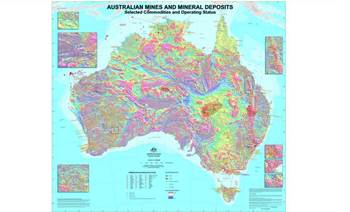 There's gold in them there datasets.

Geoscience Australia has developed a series of machine learning algorithms to hunt for minerals beneath the Earth's surface and peer through satellite imagery cloaked by cloud.

The federal government agency began its machine learning journey a couple of years ago with Uncover ML, a project to predict the thickness of the Earth's cover and what minerals might lurk below.

"We were spending too much time analysing the discrete datasets one by one," Geoscience Australia's head of scientific computing and IT Jagdish Mehra told iTnews on the sidelines of Gartner Symposium.

A multi-disciplinary team worked with scientists to develop a machine learning program, based on regression analysis, that processes magnetic data, satellite data, geochemistry data and other datasets to come up with a prediction model.

Scientists at Geoscience Australia have been putting the algorithms through their paces to see if they can predict the location of minerals as accurately as more traditional but cumbersome manual processes.

"When trying to predict something as crucial as minerals, which are very important – where are the gold deposits, where are the uranium deposits – for them [scientists] to publish something they have to trust what the software is telling them," Mehra said.

"They will use their own manual processes and machine learning and do comparisons across at least seven or eight use cases."

iTnews has published an exclusive report on the adoption of artificial intelligence within Australian enterprise. Download the report to read more individual case studies as well as analysis of the broader state of play.

Mehra estimated that the machine learning model matched the outcomes of manual processes around 80-90 percent of the time, and were "much faster".

"All you need to conduct such analysis is the IT resource power."

The machine learning applications are mostly coded in Python and run on the supercomputer at NCI in Canberra.

Geoscience Australia has "at least 15 or 16 projects running at this point in time that demand machine learnings skillsets".

Digital Earth Australia, for example, is a "world-first" analysis platform for satellite imagery and other Earth observations.

"Under the Digital Earth initiative, we have applied machine learning techniques to erase the cloud cover from satellite imagery," Mehra said.

"To use that data, you don't need to be a scientist. And it gives scientists more time to analyse the data rather than finding a way to remove such noise from the data."

Digital Earth also does water observation from space. It looks at "where have we noticed water in rivers or other corridors over the past 10 years to predict water presence" – which is useful during floods, for instance.

"We are also working on a new machine learning initiative that is about predicting groundwater presence. This is where the science areas want to apply machine learning techniques to see if they can find an easier way to predict the presence of groundwater," Mehra said.

However, the agency has come up against the problem of finding enough skilled staff to serve its machine learning initiatives.

A least two of these teams are "highly specialised in developing machine learning initiatives", he said.

Mehra has a demanding recruitment profile.

"It is not like a typical Java or database development where you can post an ad on Seek and you will find a lot of candidates looking for work. The resource pool is very fragmented," he said.

"The job ad would require the candidate to have a skillset in mathematics, the candidate must know mathematical algorithms like binomial distribution and statistics, like regression, standard deviation and mean testing.

"These are the two key skill sets we look for when we put an ad out for a machine learning specialist. On top of that you also need an IT background. You need to ability to create a model using a computer programming language.

"If you also have a degree in geology, I will take you the next day."

Mehra said there was an extreme shortage of such professionals in the market.

He plans to combat this by collaborating with industry partners and conducting roadshows in universities to try to entice skilled workers.

Mehra is currently working with the Australian Mathematical Sciences Institute and is in talks with the CSIRO about getting input from their members.