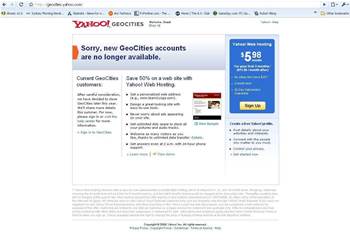 A team of volunteer web archivists have released a chunk of defunct hosting service Geocities as a 652 Gigabyte torrent file.

But the Archive Team - coordinated by ASCII blogger Jason Scott - last week stepped in on the one-year anniversary of the closure, compressing an unknown slice of Geocities down to a single file which it made available on peer-to-peer site The Pirate Bay.

"What we were facing, you see, was the wholesale destruction of the still-rare combination of words digital heritage, the erasing and silencing of hundreds of thousands of voices, voices that representing the dawn of what one might call "regular people" joining the World Wide Web," Scott wrote on his blog.

"There's history here. Real, honest, true history. So Archive Team did what it could, as well as other independent teams around the world, and some amount of Geocities was saved."

It was unknown just how much of Geocities the volunteers had managed to salvage.

Scott claimed that Yahoo! would not reveal the exact storage size of the service at the time of its closure.