Gartner warns of IT budget shortfalls in Australia 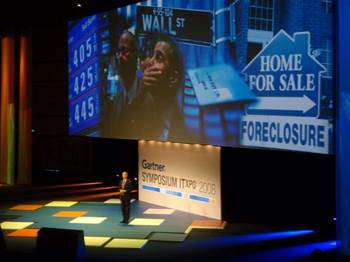 Anyone expecting a magical silver bullet from Gartner to help them ride out the current economic turmoil might have to look elsewhere for it, if the first day of the 2008 Symposium ITxpo in Sydney is anything to go by.

It was sadly a case of déjà vu for many of this year’s attendees. The overriding theme was to use the crisis to transform and modernise IT systems to meet tomorrow’s business needs (see photo gallery right for full picture rundown).

News wasn’t great on the 2009 economic front. Gartner’s senior vice president of research, Peter Sondergaard, said his firm believes the absolute best-case scenario next year is for a 2.3 percent year-on-year increase in end user IT budgets.

“However the most likely scenario is that we see budgets increase from nothing up to 2.3 per cent,” Sondergaard hastened to add.

The hardware sector is most at risk with Gartner predicting a decline for the sector in 2009. IT services growth would likely be ‘flat’, said Sondergaard.

He extended an olive branch on behalf of Gartner to any delegates having particular troubles.

“We’re ready to jump into the hole with you because we’ve been there before and we know the way out,” he said.

“May the computing force be with you. You’ll need it,” he added half-jokingly, before exiting stage left.

Andy Kyte, a research VP and Gartner fellow, appeared to sum up Gartner’s advice to the IT department - ‘use the downturn to modernise your portfolio’ and transform IT.

“Embrace the opportunity to cut the IT budget by using it as a way to reduce the number of systems running in the business,” said Kyte.

“What you will need to do that, though, is executive-level support for the business process changes that such rationalisation requires.

“I guarantee in the current situation that executive support will be forthcoming,” he said.
Got a news tip for our journalists? Share it with us anonymously here.