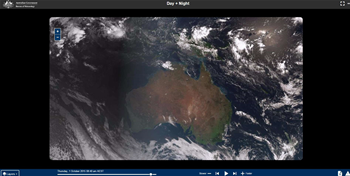 Australians can now access near real-time data on weather events after the Bureau of Meteorology made data from the new billion-dollar Japanese Himawari-8 satellite available to the public.

The BoM is one of many weather agencies around the world making use of the satellite, which was launched into space late last year and began operating in July.

The satellite generates more than 50 times the amount of data than its predecessor, and is expected to feed information back to Earth until 2022.

It updates every 10 minutes, as opposed to every hour as with the previous system. It gives the BoM's forecasters access to 16 observation wavebands capturing detail from layers of the atmosphere.

The speed at which weather data can now be provided to the BoM will allow forecasters to gain greater and more detailed situational awareness of evolving severe weather conditions, BoM director Dr Rob Vertessy said.

He labelled Himawari-8 a "game changer" for the weather bureau.

“Himawari-8 is one giant leap in satellite meteorology: it’s like switching from black and white TV to high definition colour in one jump," Vertessy said in a statement.

"Or you could compare it to switching from the grainy images of the silent era to IMAX. You can see unfolding weather in detail we’ve only dreamed of in the past."

The new satellite provides images at a much finer quality, he said, approximately four times the spatial resolution of previous satellite images - meaning the BoM can see specific phenomena like volcanic ash that could not previously be distinguished.

It has made the imagery from the satellite available to the public through a new web viewer which debuted yesterday.

People will be able to zoom in over their region and watch storm cells as well as natural events like fires.

The BoM expects the agency's capabilities to be further boosted by the arrival of its new $77 million supercomputer - being built by Cray - mid next year.

The supercomputer will replace the BoM's existing Oracle/ Sun-based high-performance computational (HPC) system, and will boast peak performance of 1.6 petaflops - 16 times faster than its current HPC.

“The skill of weather forecasters has improved dramatically over decades because of faster supercomputers that allow us to run models at far greater detail, and the growing ability of satellites to detect weather phenomena that were hitherto invisible,” Vertessy told iTnews last year.

"Weather computer models ingest data and extrapolate to provide a forecast. The better the data we put in, the better the forecast that comes out," he said yesterday.