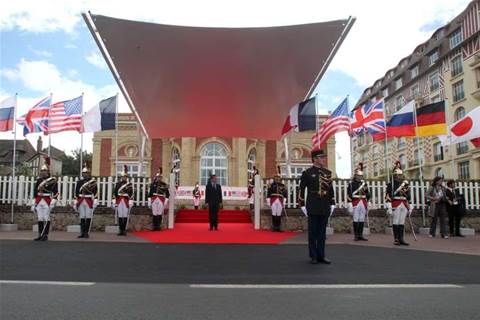 World leaders meet at the G8 Summit of Deauville, France.

The world's largest nations to jointly target IT security threats and piracy.

The leader of eight of the world's most powerful governments, known as the G8, have declared a "renewed commitment” to crack down on online copyright infringements.

The G8 countries comprising USA,  European Union, Russia, France, Germany, Japan, UK and Canada issued a major statement on the future of regulating the Internet after high-level talks in France.

The statement offered a strong endorsement of the importance of the internet in terms of global development and democracy. Its main committment, however, was a renewed crackdown on copyright infringements around the world.

“With regard to the protection of intellectual property, in particular copyright, trademarks, trade secrets and patents, we recognise the need to have national laws and frameworks for improved enforcement. We are thus renewing our commitment to ensuring effective action against violations of intellectual property rights in the digital arena, including action that addresses present and future infringements.”

While the Declaration is bullish about seizing emerging opportunities, such as “cloud computing, social networking and citizen publications”, it warns these will fuel “challenges in promoting interoperability and convergence among our public policies on issues such as the protection of personal data, net neutrality, transborder data flow, ICT security, and intellectual property.”

The declaration also endorses freedom of the internet, avoiding censorship and privacy of personal data. But it was slim in terms of renewed commitments to promote these values.

“The Internet has become the public arena for our time, a lever of economic development and an instrument for political liberty and emancipation. Freedom of opinion, expression, information, assembly and association must be safeguarded on the Internet as elsewhere. Arbitrary or indiscriminate censorship or restrictions on access to the Internet are inconsistent with States' international obligations and are clearly unacceptable. Furthermore, they impede economic and social growth.”

“Common approaches” to protecting personal data were encouraged, whilst allowing the legal transfer of data.

The Declaration argued for a light regulatory approach to the issue of child exploitation on the internet and inappropriate content for minors.

It urged the encouragement of adequate parental controls and improving children's Internet literacy around risk awareness.

The statement also recognised the need to deal with cyber security issues and urged attention to  "attacks against the integrity of infrastructure, networks and services".

The G8 said it would meet further to discuss “enhanced international cooperation to protect critical resources, ICTs and other related infrastructure”.