Revelations of an unprecedented bulk surveillance operation in the United States is putting further pressure on the Obama administration,  which is already under fire for having secretly searched phone and email records of several journalists.

The Guardian reported yesterday it had obtained a top secret court order from April this year that forced US telco Verizon to collect telephone records of millions of American customers.

Calling the operation "alarming and absolutely unacceptable", US senator Bernie Sanders slammed the Obama administration for violating the privacy of millions of people.

"As one of the few members of Congress who consistently voted against the Patriot Act, I expressed concern at the time of passage that it gave the government far too much power to spy on innocent United State citizens and provided for very little oversight or disclosure.

"Unfortunately, what I said turned out to be exactly true.

“The United States should not be accumulating phone records on tens of millions of innocent Americans. That is not what democracy is about. That is not what freedom is about. Congress must address this issue and protect the constitutional rights of the American people,” Sanders said in a statement.

Senators Ron Wyden and Mark Udall had both earlier expressed concerns over an element of the US Patriot Act, instigated after the 2001 terror attacks, that allowed for a broader authority to collect information on Americans.

A spokesman for the White House told US media the surveillance did not violate civil liberties and intelligence agencies were "conducting court-authorised intelligence activities pursuant to public statute with the knowledge and oversight of Congress."

Issued on April 25 by the Foreign Intelligence Surveillance Court (FISA), the order said Verizon had to hand over details of customer calls, how long the calls last and when they were made, on a daily basis. 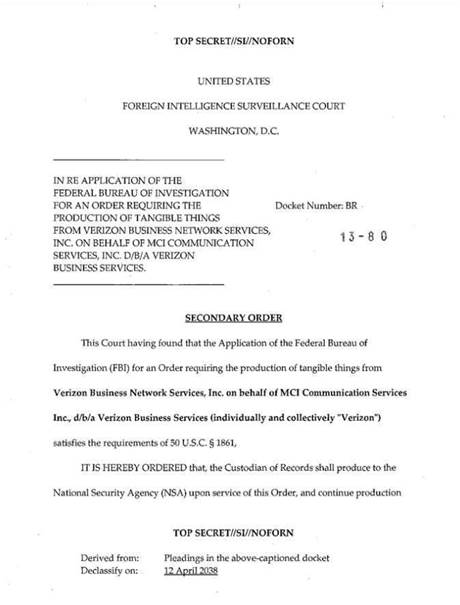 The call record information is collected from all customers, whether or not they are suspected to be threats to national security, according to the court order.

While call details are to be recorded and provided to US government agencies, the order, which expires on July 19, does not allow for the listening-in on the calls themselves.

The Obama administration has already attracted criticism for looking through the phone records of journalists as part of its inquiries into leaked government information.