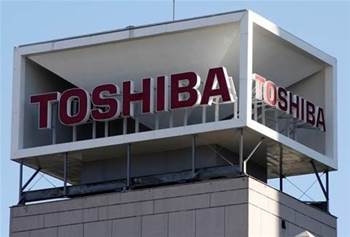 Preferred bidder in fierce contest to be announced soon.

Apple and Dell will join a Foxconn-led consortium bidding for Toshiba's highly prized chip unit, the CEO of the world's largest contract electronics manufacturer has confirmed.

Terry Gou, Foxconn's founder and chief executive, said US-based Kingston Technology, a maker of memory products, would also be part of the bidding group, while Amazon was close to joining.

The Taiwanese firm is also in discussions with Alphabet's Google, Microsoft and Cisco Systems about their participation in the bid, he said.

He declined to say how much Apple and other US firms planned to invest.

"I can tell you Apple is in for sure," Gou said, adding that its participation had been approved by chief executive Tim Cook and Apple's board of directors.

Asked about the total size of the Foxconn-led offer, he declined to give a figure, saying only that it was "very close" to other bids.

Toshiba is rushing to find a buyer for the world's second-largest producer of NAND chips, which it values at US$18 billion or more, to cover billions of dollars in cost overruns at its now-bankrupt US nuclear business Westinghouse Electric.

Foxconn, however, has not been seen as a frontrunner for the unit due to its deep ties with China, where it manufactures much of its products. The Japanese government has said it will block any deal that would risk the transfer of key chip technology out of the country.

Gou said the Foxconn-led consortium contained no Chinese capital and had the advantage of not inviting as much antitrust scrutiny as other suitors. He also played down potential opposition from the Japanese government to the bid.

"The key is that we are all customers, we are users," he said.

Foxconn, formally known as Hon Hai Precision Industry, and its Japanese unit Sharp would have a combined stake of not more than 40 percent, he added.

Representatives for Apple and the other US firms named by Gou could not be immediately reached for comment outside of regular business hours. Sharp declined to comment.

Separately a source familiar with the matter said Japanese telecoms and internet giant SoftBank Group was also part of the Foxconn-led consortium.

Gou's revelations of the Foxconn-led bid come as uncertainty spikes over the make-up of the groups competing in the hotly contest auction just days before Toshiba is due to announce a preferred bidder.

Western Digital plans to raise its offer for Toshiba's semiconductor unit, a person familiar with the matter said over the weekend, in a last-ditch effort to clinch a deal.

The US chipmaker is part of a consortium led by a Japanese government-backed fund and the group will present the new offer of 2 trillion yen (A$24 billion) or more, the source said.

The news helped Toshiba's shares climb 9 percent on Monday. The stock is still down 26 percent from levels in late December, before it flagged big losses at its Westinghouse unit.

The laptops-to-nuclear conglomerate aims to name a winner at a board meeting on June 15. Tokyo, however, has been asking Toshiba to postpone the decision as the government-led consortium has yet to finalise its proposal.

Some sources have said that the state-backed fund, the Innovation Network of Japan, is also exploring a potential consortium with Bain Capital, though it is unclear what other firms would also be members of that group.

Western Digital has been seen by some sources as crucial to a successful deal, as it jointly operates a key flash-memory chip plant with Toshiba in western Japan.

But Western Digital and Toshiba have been at loggerheads over the auction. Western Digital is pursuing an international arbitration claim that Toshiba has breached joint-venture contracts by entertaining outside bids.

Toshiba has favoured a separate bid from US chipmaker Broadcom, which has partnered with US private equity firm Silver Lake to offer 2.2 trillion yen, people familiar with the matter have said.