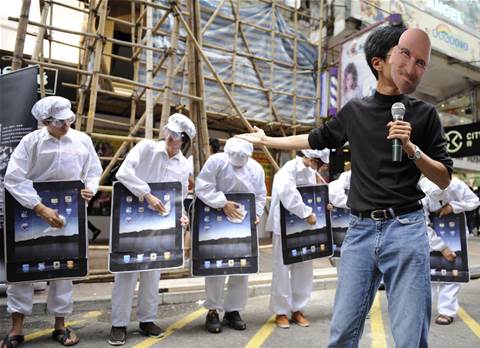 iPhone manufacturer Foxconn has denied reports that a plant in China was crippled by a strike, saying on Saturday that its production is on schedule at an important time for key client Apple.

The report of a strike issued by China Labor Watch, a New York-based advocacy group, came weeks after Apple kicked off its largest-ever global rollout for the new iPhone 5 smartphone. Apple is already struggling with tight availability of the phones in stores, analysts say.

The labor group said 3000 to 4000 workers went on strike at Foxconn's Zhengzhou complex in central China on Friday, angered by over-exacting quality controls as well as demands they work through the week-long National Day holiday, which began on Monday.

But Foxconn Technology Group, which has its headquarters in Taiwan, denied the report and said the plant suffered only two brief and small disputes several days earlier.

"Any reports that there has been an employee strike are inaccurate," the company said in an emailed statement, adding that "there has been no workplace stoppage in that facility or any other Foxconn facility and production has continued on schedule".

Foxconn said the quarrels happened on October 1-2, and were "immediately addressed and measures taken, including providing additional staff for the lines in question".

Foxconn also said that employees who worked over China's National Day break did so voluntarily and were paid three times their usual hourly compensation, as demanded by law.

But China's official Xinhua news agency quoted a government spokesman in Zhengzhou as saying some 100 quality inspectors at Foxconn refused to work for an hour on Friday after one was allegedly beaten by workers irate over the inspection demands.

"The instruction to strengthen quality inspections for the iPhone 5 was given by Apple Inc. following multiple complaints from customers regarding aesthetic flaws in the phone," said the unnamed spokesman for the industrial zone that holds the Foxconn plant.

Apple has not commented on the incident.

Tensions have boiled over repeatedly in factories operated by Foxconn, the Taiwanese contract manufacturing giant that employs more than a million and makes most of the world's iPads and iPhones. Last month, thousands rioted at its Taiyuan facility in northern China, disrupting production for about 24 hours and underscoring the potential for labor unrest.

Foxconn Technology Group of Taiwan, the trading name of Hon Hai, is the world's largest contract maker of electronics for global brands such as Hewlett Packard, Nokia and Dell.

Apple and Foxconn have come under fire for poor working conditions and wages at plants across China. In response, they have organized an audit of factory conditions, raised wages, improved safety and reduced overtime, among other measures.