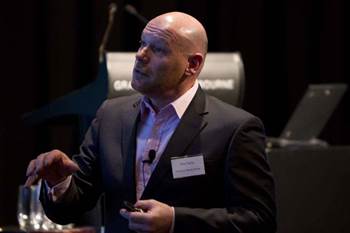 Fortescue Metals has laid hundreds of kilometres of fibre and ordered two HP container data centres for deployment in Australia’s rugged northwest in an effort to minimise potential disruptions to its ever-escalating mining operations.

Vito Forte, chief information officer at Fortescue Metals Group (FMG), announced the series of investments at a keynote address to the iTnews Executive Summit in Melbourne this week.

Forte described how his team has focused the delivery of services on achieving monstrous export growth targets set by FMG management.

The mining company intends to increase its iron ore export capacity from 70 million tonnes to 355 million tonnes a year by 2017 to help supply the billion-plus tonnes China alone will need every year by 2020.

At today’s rate of productivity, Forte explained, that task would require the hiring of some 35,000 staff. But Fortescue intends to achieve its goal without growing past 10,000 staff.

Hiring any more would prove difficult due to the lack of skilled people seeking work and the prohibitive cost of supporting workers on-site in Australia’s North-West, he said.

“So we need to get four-to-five times the [current] level of productivity,” Forte told the audience.

IT is seen as a lever by which the mining company can meet these targets, he said.

Foremost on Forte’s agenda is to find ways to support the majority of FMG’s mining, port and rail operations from its headquarters in Perth.

The mining group’s operations can never be completely centralised, he noted, as he would be dependent entirely on a “skinny piece of glass” that connects Perth to the northwest.

But piece-by-piece FMG is investing in remote operations and autonomous capabilities that reduce the need to fly staff in and out of the Pilbara.

“There is a merger occurring between traditional IT and our operational technology space, things like process control systems and SCADA,” Forte told the audience.

Among Fortescue’s first breakthroughs was the virtualisation of the systems that control the group’s expansive rail network.

Currently this rail network is some 320 kilometres long and connects its Herb Elliott Port to the Cloudbreak and Christmas Creek mines in an area FMG dubs the Chichester Hub.

It is currently being extended a further 130 km to connect the Solomon Hub mine, which is expected to come online in June 2012.

The company has also mulled plans to expand it to a third mine and second port.

Fortescue has worked with GE to certify the company’s train control system software for encapsulation within a virtual machine, such that it could be hosted and managed from FMG’s private cloud in Perth.

The mining company is also in the process of doing the same for its process control systems at the Herb Elliott Port. This will see the systems controlling stockpiles, train unloading and ship loading, among other processes, managed remotely.

Down the track, more of Fortescue’s mine site operations may be virtualised and managed from Perth.

Later this year, Fortescue will commence a trial with Caterpillar for the use of autonomous trucks at its CloudBreak and Solomon Hub mines.

FMG is investigating whether the Minestar dispatch and truck management system that underpins this trial can also be virtualised.

One of the biggest challenges to achieving FMG’s growth is adverse weather. The Pilbara tends to suffer three to four cyclones a year – cyclones that can fill pits and damage ports and rail infrastructure.

“When we talk resiliency, our concern isn’t so much our corporate applications, it’s our process control systems,” he said.

“It’s the ability to restart work as quickly as we can after a weather emergency event. We cannot afford to be down”.

The company has invested heavily in fibre communications – and hasn’t relied on Australia’s traditional carriers to do it.

Instead, Fortescue ran fibre along its expansive rail network.

That network will also connect two unique data centres due to be installed by July.

Fortescue has ordered two self-contained 20-foot HP pod data centres, one to sit at Port Hedland and another at the Cloudbreak mine, again in the name of resiliency. These should both be in place by the middle of the year.

Forte told iTnews these data centres could be utilised as either production or disaster recovery facilities in combination with Fortescue’s “private cloud” in Perth, depending on the application.

As more mine, train and port operations are managed from Perth, the pod data centres will be necessary to ensure operations can forge ahead even if links between Perth and the Pilbara goes down.

Further, as more data is collected via sensors on-site in the Pilbara over time, FMG will need to analyse it closer to the source rather than sending huge streams of data down the network to Perth.

“It’s how we’ll run our business into the future.”

Forte believes that if more physical systems such as process control are virtualised, Fortescue can recover faster from extreme weather events.

He noted that the only barriers to virtualisation of systems usually lie with the software vendors. Several have refused to support their applications when running in a virtual container.

“As customers, we have to continue to apply the pressure,” Forte told iTnews during a recent interview.  “The vendors have a history of trying to divide and conquer – when you ask for something, they will say that no other customer is asking for it.

“The truth of the matter is that it’s just easier for them to say that than be forced into investing in development or changing their pricing model.”