Flight Centre turned to Facebook to connect with stood-down workforce 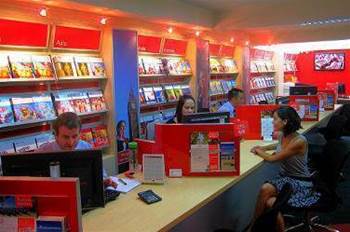 When Flight Centre stood down 7200 staff as Covid-19 hit, it disabled their corporate email access as a security precaution, but still needed a way to communicate with them all.

So the company stood up ‘Flight Centre Connect’ - a specific instance of Workplace by Facebook that allowed the travel retailer to keep communicating with its stood-down workforce.

Flight Centre has had Workplace since 2010 but it was not universally used; in fact, Australia “lagged a little bit” in its adoption and use of the platform pre-Covid, head of people and culture Allisa O'Connell told iTnews.

“When Covid hit, the amount of change management and change comms we needed to get out meant that we needed to create a really great instant platform to do that, so we used Workplace as that point of contact,” O’Connell said.

“We created ‘what’s happening now’ which was a page within Workplace where all crisis comms and information went so that people could find it easily.”

However, as the pandemic set in, Flight Centre was hit hard and forced to stand down 7200 of its 10,500-strong workforce in Australia.

Once stood down, staff lost access to their corporate mail, which was the credential needed to access the corporate Workplace instance.

However, Flight Centre still needed to communicate with these workers.

“We hadn’t made the pointed decision if there’d be redundancies or how many or who so we needed that engagement to continue,” O’Connell said.

The answer was to create an entirely separate instance of Workplace called ‘Flight Centre Connect’.

Staff were able to access Connect using their private email address; People and Culture had these addresses on file and made a single bulk upload of them to Connect to get the platform running.

O’Connell said there are still about 500 stood-down staff accessing Connect; the rest had either been made redundant or had rejoined.

When Flight Centre had important updates to share, it did so across both the internal Workplace instance as well as Connect.

“What we would do is all internal comms that were relevant or informative, we would post to both Workplace and Connect simultaneously so that people who were set up and working and people who were stood down and at home would see the same comms instantaneously,” O’Connell said.

“That then gave us a platform to inform, to educate, to engage and really keep people across the same information.

“It also stopped people having to text or ring or any other form of comms.”

Though Connect was functionally separate, stood-down employees could still engage executives, senior leaders and others directly, just as they would have done had they still been on the internal Workplace instance.

“A great thing we learned through Workplace and Connect is that ability to have people comment directly on senior leaders and executives’ posts and get responses,” O’Connell said.

“It really removes any barriers of hierarchy. I feel really positive that we’ve created a workspace where people can interact with anybody in the organisation instantly and get responded to. That’s a great thing.”

O’Connell adds that Flight Centre in Australia now has an “active strategy” around how it uses Workplace, as opposed to most of the usage and communication in the platform being “incidental”.

That has meant improvements being made to the platform, such as the introduction of chatbots to help staff quickly find content or policies or “find their own solutions” to problems by tapping into the company’s existing knowledge library.

For O’Connell herself and the people and culture team, much of 2020 was run in “survival mode”.

“Our work over the last nine months has not been that awesome but we’ve kept communication and culture as a critical piece of our business,” she said.

“We have a very strong face-to-face interactive culture and we have a lot of organisational rituals that support that in terms of communication structures that we would support face-to-face comms.

“We had to do a bit of a pivot - a buzzword of 2020 - where we had to have a really strong online presence through Workplace and Connect to keep those same messages happening.”

O’Connell is unconvinced that online tools have been able to replicate the experience or benefits of face-to-face collaboration.

The company had converted to fully online operations, from training to learning and development and town hall meetings run virtually, but O’Connell said there were limitations in that.

“I can’t wait to tip more in the direction of face-to-face and less online collaboration,” she said.

“I think online collaboration has its boundaries.

“Certainly when you’re trying to do innovative thinking or problem solving, you miss the dynamic of a group of people coming together.

“As much as the collaboration can be done online, it is not as effective as face-to-face.”

O’Connell said she looked forward to movement restrictions being relaxed and the restart of the travel industry.

While international travel remains off-limits, she said that Flight Centre had seen “massive” pent-up demand for travel of any kind, enabling the company to have its “biggest online domestic sales day ever” in November last year.

O’Connell said that a much smaller Flight Centre was ready to grow once more.

“I think a rebirth of the organisation in an environment where people are keen to buy the product is such a great place to be,” she said.

“We’ve got 3500 people who are highly committed, highly experienced. They’ve been around for a long time, and they’re ready to jump at the opportunity, so that makes it very exciting.”