Flash sort of makes it on Windows 8 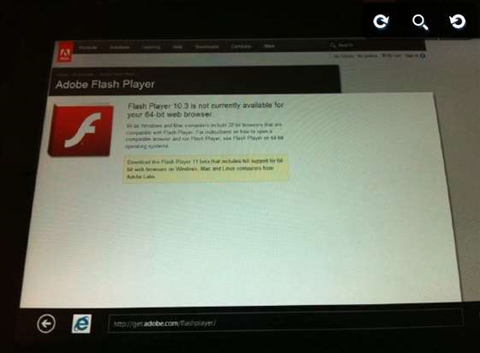 Just not in Metro.

When Microsoft first unveiled Windows 8 at the June D9 conference, a notable omission was its lack of Flash support. Its Metro interface would run purely on HTML 5 and JavaScript.

BUILD conference attendees that were yesterday handed tablets and a developer version of Windows 8 confirmed that Flash still does not run in the Internet Explorer 10 browser (see image) that came with the new OS and Samsung tablet.

Some took delight in watching frustrated peers attempt to install Flash onto their tablets.

“Just walked through press room and saw two people trying furiously to install Flash on their Win8 tablets. LOL,” wrote the editor of a series of Windows books, Jon Hassell.

Even a former Australian Microsoftie, Scott Barnes, was disappointed after attempting to revive his daughter’s EEPC with Windows 8.

“I put win8 on my eepc.. was hoping to use that as my 4yr daughters laptop for Penguinclub but..flash dont work...bah! :),” he Tweeted.

However, according to New York-based developer Jesse Freeman, Flash did work on Windows 8, just not in Metro mode.

“I guess #win8 is in iPad compliance mode. Looks like its fine on the old win mode,” he wrote.

Microsoft has not discussed the place Flash would fill in Windows 8 but it shared details of how Internet Explorer 10 would operate in Metro.

“You’ll get the best immersive, touch-first experience of HTML5 websites with the Metro style browser in Windows 8. If you prefer more traditional window and tab management, you have that in improved form with IE on the desktop. Both run on the same IE10 engine,” said Dean Hachamovitch, Microsoft’s corporate vice president of Internet Explorer.

"The single engine provides strong support for web standards, hardware-accelerated performance, security, privacy, and more. Then, we built two experiences on top of that engine: a new Metro style experience as well as a more traditional, current-generation desktop browser with tabs and relatively minimal “chrome.”