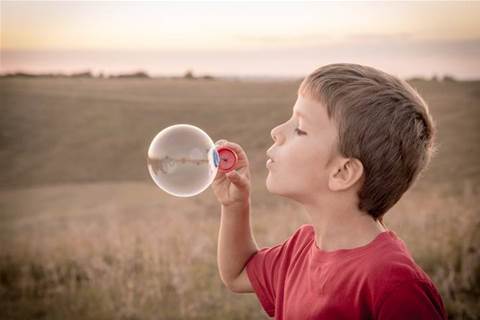 Labels chip sales slump a blip ahead of “bullish outlook”.

Against a backdrop of local providers like NextDC reportedly heavily shorted, the global trends watcher this week called BS on a speculated cloud and DC rout, issuing a note unambiguously headed “Datacentres and cloud: Rumours of death are greatly exaggerated.”

The snappy report – issued by the research arm rather than the ratings agency of the same name – comes off the back of some particularly nasty sales results for chipmakers last quarter that hit Intel, Juniper, Nvidia, Micron Technology and TSMC.

“High-end data centre-grade chip sales fell sharply in Q418, suggesting a peak had been reached in the datacentre and cloud computing boom,” Fitch said in a note to clients.

“Leading cloud service players' Q418 results tell a different story, with positive growth across the board, particularly for leaders AWS, Microsoft and Google.”

The stark disparity raises obvious questions about what created the jarring pothole in chipmaker profits, especially against the backdrop of escalating trade and cyber security tensions between the US, Western Europe and China which has investors understandably jittery.

The take from Fitch – renowned for calling out duds and bubbles – is that a bunch of things lined-up to rip a hole in profits; but those factors aren’t in themselves indicative of a wider decline in demand for cloud compute muscle or DC grunt.

Quite the opposite, it reckons.

One of the most telling observations is that the cloud and DC market is going through a bit of a rollover period after some consolidation, with an attendant lag period before lots of shiny new sheds full of the latest kit come online.

“The data centre market has moved out of a period of consolidation in 2018 and into a new build-out cycle in the hyperscale range, as evidenced by recent announcements of new site constructions from key global and regional data centre players, including Google, Amazon Web Services and CtrlS,” the Fitch Solutions note reads.

“These new facilities will need high-end graphic processing units (GPUs) from the likes of Nvidia and Intel, among others but, as many of these new sites are not projected to be operational until 2020, it may be that demand from the data centre segment will not pick up until the latter half of 2019.”

But the big eye-opener in the note is who's really been buying-up high end boards, only to be forced to offload them to hardware arbitrageurs. Next time you see a coin exchange go belly-up, get your bargain hunting credit card ready.

“The data centre-grade GPU market was unexpectedly flooded with surplus units as the extreme volatility in the cryptocurrencies sector saw large numbers of private digital coin miners go out of business or scale back their operations and sold their most valuable assets - GPUs - at low prices, dampening demand for new stock from the global vendors,” Fitch observed.

“These will have been snapped up by data centre operators in defensive or consolidating mode, to see them through their medium term expansion drives.”

The Infrastructure-as-a-Service is trend is also going strong, Fitch maintains, with the IT equivalent of build-to-rent well and truly taking hold. The analyst reckons this is where you should look to see the real state of play.

“Revenues from GPUs sold to businesses' IT departments are therefore decreasing, meaning that it is the data centre service providers' results that more accurately reflect the state of the industry,” Fitch said.

There is some effect from a slowdown in China, but that came from “the imposition of stricter regulations on the gaming sector, leading to reduced investment in complex multimedia games dependent on GPUs.”

“Our belief that GPU segment - and the leading vendors - will recover in 2019 is underpinned by the latest quarterly results from the world's principal cloud computing service vendors.

“The dominant player, AWS, reported a 45 percent y-o-y increase in its 'cloud service' revenues in the quarter ended December 31 2018, to US$7.4 billion. Meanwhile, smaller players Micros oft, Google and Alibaba saw y-o-y increases of 76 percent, 80 percent, and 84 percent in their cloud service revenue numbers, reaching approximately US$3.7 billion at Microsoft and US$1bn at Alibaba,” Fitch said.

Bitcoin. What's not to love?