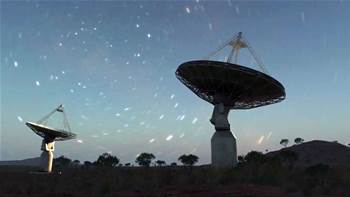 The telescope (pdf) comprises 36 antennas and is supported by high-capacity fibre optic connections to Perth, including those of the National Broadband Network, and considerable supercomputing power.

CSIRO SKA director Dr Brian Boyle said "science operations" would be commissioned "as soon as the opening ceremony is finished" this afternoon.

"We plan on doing science observations almost before the end of the year," he said.

Boyle said that CSIRO would have six phased array feeds - "radio cameras ... that sit at the focal centre of each ASKAP dish to receive incoming cosmic radio waves" - operating by the end of the year.

"What will actually happen is that we'll manage the surveys so that we dovetail the requirements of the surveys with the growth and the deployment of the phased array feeds and the commissioning phase [of the telescope]," Boyle said.

"So you can imagine the commissioning phase being intensive over the next three-to-six months and then ramping down as the science ramps up."

While that meant that ASKAP would "start doing science before the end of the year", Boyle expected it would be a year before the first scientific results from ASKAP were made public.

He noted that the first five years of ASKAP was already booked out "by international colleagues".

"Over 350 different researchers from 150 institutions around the world have booked up to use time on ASKAP," Boyle said, noting ASKAP's popularity was "another way of showcasing Australian and CSIRO technology and its achievements to the rest of the world".

Boyle told journalists ahead of today's launch that he was going to "feel pretty humbled" when all of the ASKAP stakeholders assembled for the official opening.

"I think many people believed that we couldn't do it, [that] we couldn't build a telescope of this scale, particularly with the technology around the radio camera," he said.

"But I think we've now demonstrated to the rest of the world that we can, and over the next two-to-three years we're going to see the science emerge from this world leading telescope."

The ASKAP radio telescope will ultimately form part of Australia's contribution to the Square Kilometre Array (SKA), which is being jointly built by Australia and South Africa.