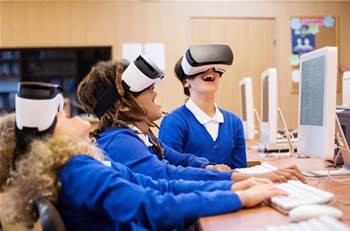 Someone needs to go back to school.

Federal Education minister Dan Tehan has invited schools to apply for community improvements grants, and said he thinks a fine use of the cash would be “cutting edge computer facilities” or other beneficial projects.

We’re not sure what the member for Wannon considers cutting edge these days, but $20,000 almost certainly isn’t enough to deliver anything considered "cutting edge".

Using the same figures as a guide, a typical primary school can get two classrooms worth of Chromebooks if they each have about 22 students (the rough average in Victoria, NSW is higher after kindergarten), which isn’t exactly the most impressive tech roll-out.

And of course Chromebooks lack GPUs, which leaves them a fair way behind the cutting edge.

A school might also be able to nab itself a couple of digital whiteboards, but they’re also pretty standard fare in schools these days.

And if each school gets the maximum $20k, there will only be enough funding for 10 schools to do anything.

The money for the program comes from the $30.2 million Local Schools Community fund, which Tehan said was part of the Morrison government’s “record funding for Australian schools”.

“The Local Schools Community Fund is additional funding that builds on our investment by allowing individual schools to nominate their own projects that will make the biggest difference to their school community.

“This is a fantastic opportunity for local schools to apply for funding for projects that are on their wish list.”

The money can be put toward a variety of other projects outside of computing, including targeted student support, sporting facilities and equipment, or “small-scale building extensions”. Small-scale indeed.

All schools are able to submit projects for consideration until 30 September, however, eligibility conditions do apply.