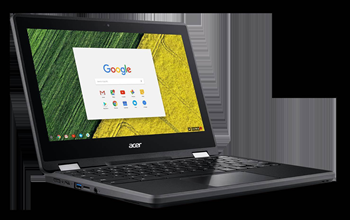 The Australian Capital Territory has purchased 15,000 Chromebooks from Acer to equip every student from years seven to 11 with a personal electronic device.

Education minister Yvette Berry announced the purchase today. The devices will be made available to students when they return to school next year.

Acer will work with Datacom ACT to deploy the Acer Chromebook Spin 11 in Canberra schools.

The value of the deal between the ACT government and Acer was not revealed.

The ACT government had committed to give every high school student a personal device in the lead up to the 2016, and allocated more than $17 million in its 2017-18 budget to fund the rollout.

The Acer Chromebook Spin 11 was launched in January this year, and is designed specifically for classroom use. It runs Google's Chrome operating system.

The laptop comes with a either a quad-core or a dual-core Intel Celeron processor with 4GB to 8GB of memory, and 32GB to 64GB of storage, depending on the model. It carries an 11.6-inch screen with 1366 by 768 pixel resolution and anti-microbial coating.

The screen uses a 360-degree hinge that offers four moes of usage, and students can write and draw on the display with a Wacom Electro-Magnetic Resonance stylus. Two high-definition webcams are included.

Acer said the Chromebook Spin 11 adheres to the US armed forces MIL-STD 810G standard and can cope with being dropped from 122cm, and having 330ml of water spilt on the device.