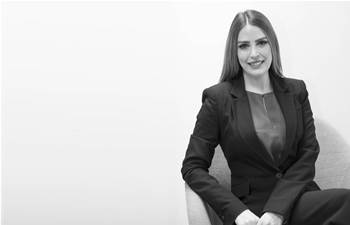 The hardest day of work Jessica Der Matossian has ever done was on a day off.

That day came in mid-February 2020, when the digital practice registrar at the Federal Court of Australia took time off to help her partner prepare his florist shop for the bloom-buying frenzy that is Saint Valentine’s Day.

The University of Western Sydney Business/Law graduate found herself waking at 4am, learning about supply chains that bring roses from Kenya and Columbia to Sydney, then working until 11pm to prepare more than 1000 bunches of flowers. She also learned about the Saturday morning trade in very large, very expensive and vastly apologetic arrangements purchased by those who forget Valentine’s Day.

Learning new things seemingly comes easily to Der Matossian, whose decade-long stint at the Federal Court saw her start as a lowly court officer, before becoming a registrar’s assistant, a judge’s associate and then join the court’s policy team.

After a couple of years in the latter role, in 2017, Der Matossian felt she needed a new challenge.

Her itch needed scratching not long after the 2016 melding of the corporate services teams at the Federal Court, Family Court and Federal Circuit Court.

Her boss at the time saw a need for an innovator to make the combined team sing.

“He was a visionary for the court and identified a gap in the organisation to champion innovation and introduce digital practices to the court,” Der Matossian said. “He asked me if I could merge the law and technology a bit more.”

Der Matossian is not a trained technologist. But encouraged by her CEO’s belief that she had a knack for tech, she took on the role and found herself in meetings with IT staff, legal staff, and herself in the middle.

And she liked it there.

“I started by doing a lot of reading, a lot of talking and listening to people,” Der Matossian told iTnews. “I realised every project I have worked on has some sort of involvement with the IT team, but I do not go into the room thinking I know it all.”

Over time, she came to understand the role as a much-needed intermediary between IT and the Court.

“I felt like I became the translator. I’d be in meetings with IT guys and legal experts, and they could not talk to each other. I translated between the two groups.”

By early 2018, those growing skills saw her asked to serve as both product manager and project manager for a new Family Court Artificial Intelligence project that used a database of 1600 consent orders [the official document describing a divorce settlement – Ed] to see it was possible to make automated recommendations about the best and fairest way to share property after a relationship breaks down.

Such a system is desirable because divorces are stressful and can be expensive – especially as couples try to asses a fair division of assets while taking into account issues like the impact of parental leave on earning capacity. The Court felt that if it could assist couples with neutral guidance, it would make the process easier, faster and potentially cheaper by reducing the number of cases that come before a judge.

The proof-of-concept AI project quickly achieved over 90 percent accuracy of settlement recommendations, for under 80 percent of cases. That’s a strong indicator that AI can make divorces quicker, cheaper and more equitable.

Colleagues praised Der Matossian for being able to identify clients’ needs, for recognising the potential of AI to meet them, and for working across teams to make that vision a reality. They also applauded her desire to make a difference, ability to learn quickly and success at creating respectful multi-disciplinary teams.

Der Matossian herself told iTnews she’s happy to have been named a finalist in the Young Leader category of the 2020 iTnews Benchmark Awards, as that will increase interest in and exposure for her AI project, and therefore hopefully improve service to the Court’s clients.

We can’t say now whether she won. But we can report she received a reward for her labour in the florist: three days ahead of Valentine’s Day her partner picked out three dozen fresh roses to make sure she understood how appreciated her efforts would be.

And if her AI is fully-adopted, iTnews imagines it may not be the last bunch of flowers she receives from people grateful for her help during stressful times.

This project is a finalist in the Young Leader category of the iTnews Benchmark Awards 2020.