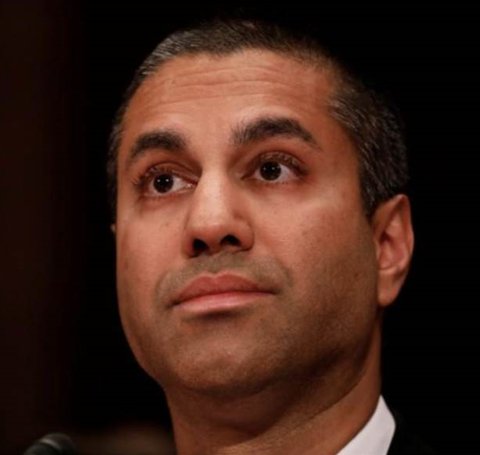 The chairman of the US Federal Communications Commission plans to repeal a landmark 2015 order that barred internet service providers from blocking or slowing down consumer access to web content.

With three Republican and two Democratic commissioners, the move is all but certain to be approved.

Trump expressed his opposition to net neutrality in 2014 before the regulations were even implemented, calling it a “power grab” by former President Barack Obama.

“The FCC will no longer be in the business of micromanaging business models and preemptively prohibiting services and applications and products that could be pro-competitive,” Pai said.

He said the Obama administration had sought to pick winners and losers and exercised “heavy-handed” regulation of the internet.

“We should simply set rules of the road that let companies of all kinds in every sector compete and let consumers decide who wins and loses,” Pai said.

Pai said state and local governments “need to be preempted” from imposing their own net neutrality rules because broadband internet service is “inherently an interstate service.”

The preemption is most likely to handcuff Democratic-governed states and localities that could have considered their own plans to protect consumers’ equal access to internet content.

The FCC’s planned action represents a victory for US internet service providers including AT&T, Comcast and Verizon, which had urged the FCC to revoke the rules.

The companies have said that repealing the could lead to billions of dollars in additional broadband investment and eliminate the possibility that a future presidential administration could regulate internet pricing.

In July, a group representing major technology firms including Google parent Alphabet and Facebook had urged Pai to drop plans to rescind the rules.

The FCC will also vote on Pai’s proposal to require internet service providers to disclose whether they block or slow down consumer web access, or permit so-called internet fast lanes to facilitate paid prioritisation.

Such disclosure will make it easier for another watchdog, the Federal Trade Commission, to act against internet service providers that fail to disclose such conduct to consumers, Pai said.

The FCC under Obama regulated internet service providers like public utilities under a section of federal law that gave the agency sweeping oversight over the conduct of these companies.

A federal appeals court last year upheld the legality of the net neutrality regulations, which were challenged in a lawsuit led by a telecommunications industry trade association.

The FCC’s repeal is certain to draw a legal challenge from advocates of net neutrality. Many Democrats and some online companies argue that the existing rules protect the openness of the internet, which will be gone without them.

New York attorney general Eric Schneiderman, a Democrat, wrote on Twitter, “The internet is the public square of the 21st century. Unless we all speak out against the FCC’s efforts to gut net neutrality, the free and open internet we know today could be gone for good.”

The new order will reclassify internet providers as “information services” rather than “telecommunication services,” which means the FCC has significantly less authority to oversee them.

FCC granted initial approval to Pai’s plan in May, but had left open many key questions including whether to retain any legal requirements limiting internet providers conduct.

Pai said the FCC is adopting a “market-based deregulatory approach.” The FCC also will vote to eliminate the “internet conduct standard,” which gives the FCC far-reaching discretion to prohibit any internet service provider practice that it believes violates a long list of factors and sought to address future discriminatory conduct.

The FCC chairman said his goal is to use a “light-touch market-based” regulatory approach, arguing the internet operated well before the rules were adopted in 2015.

The internet “is the greatest free market innovation in history,” Pai said, adding that government regulations could hinder that.