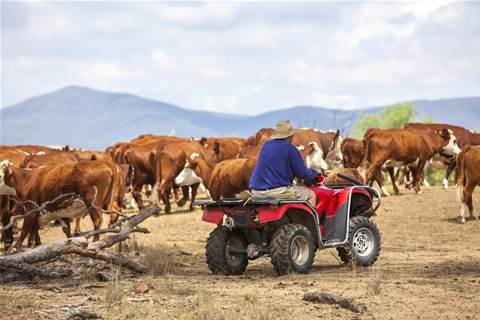 Australian farmers are renown cutting through the crap routinely delivered by big corporates and politicians seeking to look closer to the land.

So it was only ever really a matter of time before the public relations props of agtech and blockchain felt the sharp sting of reality from the rural stock whip.

So it was this week, when the National Farmers Federation bowled up its extensive and plain English take on all things agtech, X-tech, telco and blockchain to Canberra, tipping a bucket on all the giddy talk of IoT powered farms, supply chain transformation and robots in the fields.

There is plenty of innovation happening in the ag sector, the peak body for farmers duly notes, but there’s also quite a few annoying tech issues getting in the way; and a tendency for the tech sector to try and tell people on the land how to run their farms with gadgets when more basic fixes are needed.

Like broadband, which the NFF notes could be a lot better in its submission to the Senate Select Committee on Financial Technology and Regulatory Technology, especially if the raft of tech pilots and prototypes are ever to make it into everyday use.

“Future applications will further encompass data-driven technologies that employ automation and robotics, artificial intelligence (AI) and machine learning and satellite and remote sensing capabilities," the NFF said in its submission.

“The nature of the broadband connectivity options available (including coverage, speed, price, capacity and latency) is an important factor in technology uptake, and the poor quality of services in areas of regional Australia is a major factor restricting uptake.”

The issues of bush broadband, or lack thereof, is of course well-documented and has for decades been the subject of direct government regulatory interventions such as the Universal Service Obligation to stop telcos deserting or price gouging regional areas.

Even when there is access, farmers note that a fair bit of the agtech pushed in their direction doesn’t really pass muster on the usefulness front.

“Producers perceive the value propositions of agtech products and services to be weak. This issue is compounded by a lack of interoperability between products – i.e. farmers are unwilling to pay for a tool that isn’t compatible with the machinery / software / other tech that they already use or might purchase,” the NFF paper notes.

“Technologies are being pushed into the industry by entrepreneurs who do not understand the complexities of farming, rather than pulled into agriculture by producers who see value to be gained from adopting agtech solutions.”

Farmers are also justifiably wary of just giving up their data or being locked into platforms on promises of great things to come.

With agricultural data being a prized asset in terms of trading and pricing on commodities markets for centuries, farmers want to know who is getting what when they plug into new systems.

“Concerns about data privacy and ownership, and how farm data is used by agtech providers, undermines trust and can limit uptake. In addition to these cross-cutting barriers, there are specific issues preventing uptake of individual technologies.”

On that front blockchain gets a special mention, not so much for its immutable utility but for its power bill, which is pretty steep.

“Research has found that key limitations to the widespread uptake of commercial blockchain applications in agriculture include high energy requirements to fuel processing power,” the NFF paper says.

The paper also singles out the “availability of mechanisms, such as sensors and automated data capture, to capture error-free data” noting that adoption “may require an investment in additional, accurate data collection, and the returns on this investment are not yet assured.”

“There is a significant and increasing amount of data collected on-farm and through the supply chain, and while the potential benefits and value of using this data are considerable, the tension between those who provide the data (farmers) and those who collect and have rights to the use of the data (agribusinesses and third parties) is a major hurdle to realising those benefits,” the NFF paper says.

Farmers also want a say on how data reaped from the land is used, going as far to push a regulatory code back to industry, with the NFF developing “a voluntary Farm Data Code of Practice, to provide assurance to farmers around how their data will be used and that the value coming from that data will flow back to farmers.”

You don't hear about that one in too many IoT case studies.