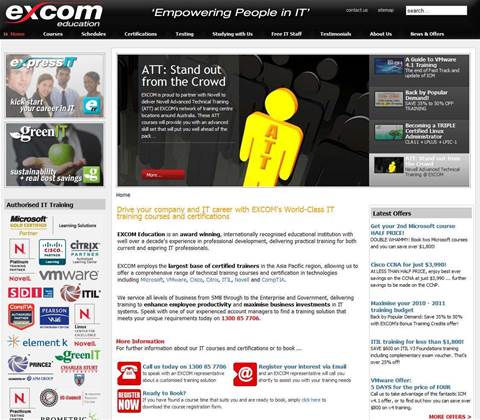 In the absence of official word from Excom Education about the closure of its training centres yesterday and the removal of its website, affected staff and students turned to social media for solace.

iTnews believed staff at the national training provider that once certified major vendors such as Microsoft, Cisco and VMware were told on Tuesday night that it was to close but that a sale to a competitor was considered.

"Wow Excom closes down :-s they have a stand at #auteched too! (Should we tell them??)," tweeted Perth SharePoint consultant Jeremy Thake from the floor of Microsoft's TechEd annual conference on the Gold Coast.

A Microsoft spokesman said that Excom was not asked to leave but he declined to comment further. Excom was listed as a sponsor and exhibitor on the Tech Ed website.

"Darn, #Excom owe us 2 weeks of training. I have a team member who was going on a week of Windows7 training next week...I guess not!" wrote another yesterday afternoon.

Those affected turned to broadband community forum Whirlpool to share what they knew of Excom's closure.

"A mate that is doing a course there was called and told his last day of training and exam are cancelled due to Excom closing the doors," posted a forum regular.

In reply, a Brisbane user posted: "As a now former employee there....yes they have closed the doors. And we only found out when students did at around 5pm. Not particularly impressed...."

The sudden closure affected most students who had completed their studies and were due to take exams and those who paid hefty sums or came to Australia to study, posters wrote.

"What about the Express IT students (many working as taxi drivers, factory hands etc) encouraged by management to sell [their] cars and take out loans they couldn't afford to pay the $25,000 tuition fee as they were promised a guaranteed job in IT."

Just before Excom shuttered its website about noon yesterday it was still advising prospective students of its Express IT, Linux, and VMware courses and offered up to half off its training prices.

The IT Infrastructure Library accredited trainer listed partners on its website:

And rival training provider Dimension Data lent a hand to students left out in the cold by Excom's closure.