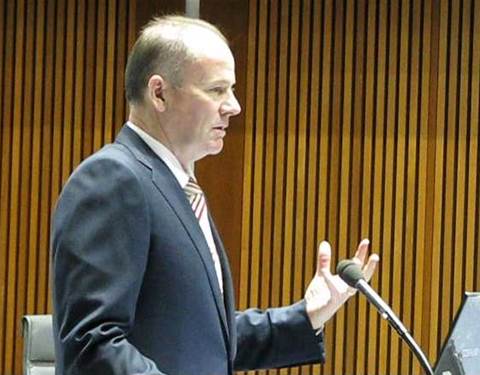 How the internet changes politics.

In June, the Federal Government announced it would spend $2.45 million on a 15-member Web 2.0 Taskforce, to investigate new ways in which the Government might interact with its public.

In Part Two of iTnews' interview with Finance Minister Lindsay Tanner, we discuss how the internet is likely to reshape the future of the political process.

iTnews: What is the Web 2.0 workforce all about?

Tanner: The Web 2.0 taskforce is really about how government relates to the wider world.

It is really dealing with two separate but related questions.

The first relates to government data.

By definition, across government there is this vast quantity of miscellaneous data of all shapes and sizes. Some of it readily, publicly accessible, some of it not particularly sensitive or secret but nonetheless either not made public or made public in a way that makes it difficult to use.

The former Government, to its credit, made most of the ABS' [Australian Bureau of Statistics] work available free. With the idea being that it will increase business productivity, and that some businesses will even emerge built around manipulating and making better use of that data.

So that's the first objective of the taskforce - to scope that question with some thoughts about how to make our information more accessible and useful.

The second is essentially government blogging, how to use Web 2.0 technologies to improve the dialogue between government and the rest of society.

Although there is a whole set of mechanisms for government consultation - whether it's a one-off exercise when you have a one in ten year review of a system or whether its ongoing, round-the-clock feedback processes - because they are totally dependent on traditional mechanisms, the outcome is they tend to function bilaterally.

So you might make a submission to an inquiry I am running, and I might respond to that submission, but someone down the road might be completely unaware of what's in your submission and vice versa, unaware of my response to your submission, and vice versa. And therefore you don't get the depth and richness of engagement that you get when have got genuine conversation going on - when the Government is one party in a room full of all different parties that can all engage with each other as well as the Government.

iTnews: What got you thinking about blogging as a potential solution?

Tanner: The old world example that got me thinking about this is a gym that I used to attend in Melbourne.

They have this cute little system, where there is a complaints and queries pad in a prominent spot in the weights room. You scribble down whatever - why is this machine broken, when are you going to get a new treadmill, whatever. And there is a space for staff responses at the bottom. You pin these notes up on the board. At any given time there are a dozen or fifteen of these things pinned up on the board, and even if you don't fill one out, you can idly just scan and scrutinise them.

So the process of interaction between users and staff - whether it is about what needs to be fixed or a thank you note for that matter, is in a sense public and involves everyone, rather than being bilateral.

That made me think - this is precisely what Web 2.0 technologies and blogging enables. You can actually have that conversation openly and publicly when everyone is in on the deal, rather than Government being a hub-and-spoke - a model where you have fifty different conversations with fifty different players, none of whom can hear the other conversations. That is what is driving my commitment to push this thing through.

iTnews: What challenges lie in setting up government blogs?

Tanner: There are a number of big challenges. One is resources. By definition, a deeper process of consultation and discussion means there has to be somebody there flying the flag on behalf of the Government, answering questions from the Government point of view.

Secondly and perhaps more significant is the issue of 'authority to speak'.

There is a very traditional structure with governments where there is a pyramid structure - the person at the top of the pyramid is the public face and makes the statements.

There are very good reasons for that of course. If you have fifty people purporting to speak on behalf of the Department of Finance, the chance they are all saying the same thing is not very high, and aside from the obvious political issues that raises, there are practical issues. If you're trying to find out what the Department's position is on a given issue, and you're confronted with half a dozen different versions, it makes it pretty hard for you to know - particularly if you're a business - making decisions, should I invest in this or that?

You want to know what the Government's position is. Half a dozen versions don't add up, and that's a problem.

They are the kinds of issues we are asking this taskforce to toss around.

Click here for Part One of iTnews' interview with Lindsay Tanner, discussing IT cost cutting within the Australian Government.