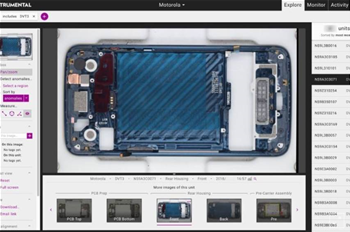 For years, hardware engineers at American consumer electronics firms have hopped on a flight to China to iron out manufacturing kinks on assembly lines, but the COVID-19 pandemic and Sino-US tensions have made travel between the countries difficult.

A startup founded by ex-Apple engineers, however, has come up with a system that would help engineers troubleshoot remotely.

California-based Instrumental, co-founded by Anna-Katrina Shedletsky and Sam Weiss, has created a system that relies on outfitting manufacturing lines with cameras and then analyzing the images using artificial intelligence software.

To spot a problem, an engineer needs to just log on to the software rather than board a plane.

In the early days of a product, hundreds of issues can crop up and, to fix these, firms “send big groups of people 6000 miles around the world to go stand on the line in random spots and hope that they catch the problems, by getting lucky being in the right place in the right time,” Shedletsky said.

Cameras and artificial intelligence, by contrast, can spot missing screw, a bent spring or a damaged battery in real-time and with high accuracy, she added.

“While certain parts of the world can be open and functioning, travel is unlikely to be open and free for a while,” Shedletsky said.

Firms such as Motorola, owned by Lenovo, have been using Instrumental’s software for several years for mobile phones, but with the travel curbs, “we’ve really had to rely on it a lot more,” said Kevin Zurawski, a supply chain management executive at Chicago-based Motorola.

“It’s been an incredible tool to be able to sit at my desk 6000 miles away and monitor build progress,” he said.