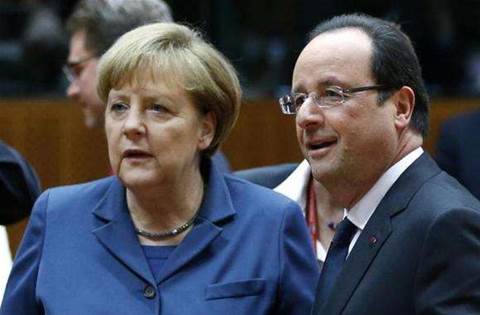 Merkel and Hollande in talks.

German Chancellor Angela Merkel has revealed she would talk to French President Francois Hollande about building up a European communication network to avoid emails and other data passing through the United States.

Merkel, who will visit France on Wednesday, has been pushing for greater data protection in Europe following reports last year about mass surveillance in Germany and elsewhere by the US National Security Agency. Even Merkel's cell phone was reportedly monitored by American spies.

"We'll talk with France about how we can maintain a high level of data protection," Merkel said.

"Above all, we'll talk about European providers that offer security for our citizens, so that one shouldn't have to send emails and other information across the Atlantic. Rather, one could build up a communication network inside Europe."

Hollande's office confirmed the governments had been discussing the matter and said Paris agreed with Berlin's proposals.

"Now that the German government is formed, it is important that we take up the initiative together," an official said.

Government snooping is a particularly sensitive subject in Germany due to the heavy surveillance of citizens practised in communist East Germany and under Hitler, and there was widespread outrage at the revelations of NSA surveillance by former NSA contractor Edward Snowden.

"We've got to do more for data protection in Europe, there's no doubt about it," Merkel said on Saturday.

Germany has been pushing, so far in vain, for a 'no-spy' agreement with Washington.