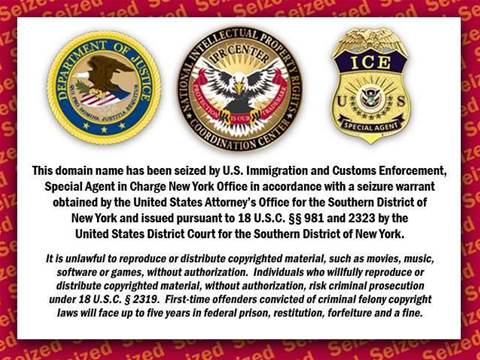 Crackdown on counterfeiters ahead of the Christmas season.

European and United States law enforcement agencies have conducted a large round of domain name seizures in their effort to stamp out trade in counterfeit products.

Under an operation titled "Project In Our Sites Transatlantic V", the effort resulted in 292 domain names being seized by police in several countries in Europe and the United States.

The operation targeted sites related to counterfeit luxury goods, sportswear, electronics, pharmaceuticals as well as pirated movies and music, law enforcement authorities from both jurisdictions said in a joint statement.

The trans-European police coordination authority Europol did not say which domain names had been seized or which registrars were involved in the operation.

All in all, Europol said 25 agencies from 19 countries were involved in an effort directed by the National Intellectual Property Rights Coordination Centre (NIPRCC) in the United States, which is tasked with enforcing intellectual property laws by the US government.

NIPRCC acts on leads from trademark holders who identify infringing websites, and passes on the information to law enforcement in countries that participate in Project IOS.

Since Project IOS commenced in November 2012, a total of 1,892 domain names have been seized, Europol said.

The Project IOS initiative is modelled on an earlier US effort by the country's Immigration and Customs Enforcement (ICE) authority, which has seen thousands of domain names seized over the last few years.

Domain name seizures have been criticised by civil rights groups and by European politicians for not giving the owners a chance to defend themselves.

They also won't stop the sites themselves from operating - instead making it harder for purchasers of goods to find them on the internet.

The EU is proposing further efforts against intellectual property rights infringement, which the trading bloc said causes an annual loss worldwide of around €200 billion (A$294 billion).

Among the measures proposed was a crackdown on online advertising agencies and payments service providers that profit from what the EU claimed was commercial-scale infringements on the internet.

The trading bloc also proposed greater cooperation between EU member countries and a reducing of red tape for smaller businesses to help them more efficiently enforce their intellectual property rights.