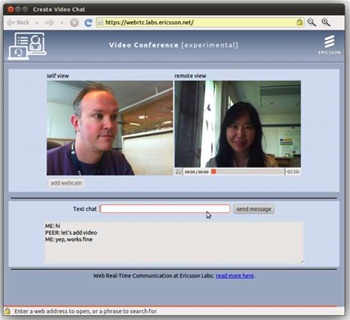 The research arm of Swedish telecoms supplier Ericsson announced Tuesday that it had built the first browser with native HTML support for Skype-like applications.

The application protocol interfaces in its browser were all in JavaScript and HTML. Therefore "there was no need for plug-ins," the researchers explained.

Ericsson had been toying with the Gnome project’s Epiphany browser since last year to build “experimental implementations” of Web-RTC in WebKit GTK+ and was now ready to invite developers to test its WebKit library.

But there were a few caveats. The implementation was insecure, unstable, only had Ubuntu support and should definitely not run in a non-production environment, Ericsson warned.

“It is merely a way get hands-on experience of upcoming browser features. Only Ubuntu 11.04 is supported and you should be prepared to get your hands dirty,” it said.

The longer term goal of native HTML support for such applications would come through the WHATWG HTML specification, backed by Apple, Mozilla and Opera.

Google’s efforts have focused on putting WebRTC into its Chrome browser, and more recently Google+.

The WebRTC project was born after Google donated voice engine technologies last May. The project, also supported by Opera and Mozilla, hailed a victory last month when it integrated WebRTC media processing capabilities into Chrome.

The ultimate goal was to allow web developers to create browser video and chat applications that sat natively within the browser, which may produce a viable alternative to Skype.

Google's efforts were focused on the Hangouts feature on Google+, according to a detailed analysis of its plans by GigaOm, which pointed out that it currently required plug-ins to operate voice and video applications in the browser.

“We built an all-new standards-based cloud video conferencing platform,” that “leverages the power of Google’s infrastructure”, he said.

“This platform combines high quality, low latency, and strong security with the ease of use of a web application. Through the efficiency of this new platform, we're able to deliver a leading video conferencing experience at Google scale.”