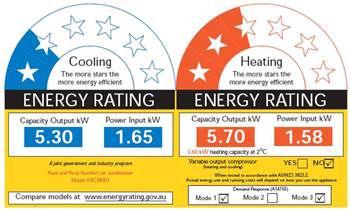 The Australian Department of Industry is seeking views from industry on a report that recommends servers, storage and other data centre equipment sold in Australia and New Zealand be subject to an energy rating scheme akin to the stickers affixed to fridges and other household goods.

Adherence to an ‘Energy Star’-style program is one of several recommendations made by research group Consumer Research Associates in the report commissioned by the Equipment Energy Efficiency program, which operates on behalf of the Australian Government, state governments and the New Zealand Government.

The report authors calculated that a mandatory comparative energy ratings label for IT kit could save 1.7 TWh (6.1 PJ) from servers and 0.4 TWh (1.4 PJ) from data storage arrays if introduced between 2017 and 2030, assuming kit is upgraded every four years.

“It is recommended that product standards for servers are introduced in Australia and New Zealand. These could be in effect by around 2016 if development starts in 2014.”

The report noted the problem with an energy-star style scheme is that IT infrastructure doesn’t tend to be sold via retail outlets where labels are visible.

“However, there are a large number of trade fairs and websites for which the information can be produced. Furthermore, most research suggests that the label does not directly influence the consumer to purchase high efficiency equipment. It is likely that the manufacturers respond to a mandatory label by improving efficiency when there is a highly competitive market and a lower rating presents a risk to their sales and brand.”

The researchers did not recommend a ratings system on switches and routers on the basis that “there is insufficient information to determine what approaches and savings are possible for networking equipment.”

A rating scheme would create compliance issues for the multinational vendors that ship IT equipment to Australia, and would similarly provide government agencies with the challenge of keeping up-to-date with the server and storage market.

Ross Hamilton, a member of the Department of Industry’s appliance energy efficiency team, told iTnews the report was commissioned in the hope of “driving energy efficiency in Australia and New Zealand”, but that its recommendations “are not necessarily the view of the Government.”

The report also recommended the voluntary NABERS for data centres scheme be made mandatory for certain stakeholders.

It proposed that by 2015, Australian and NZ Governments mandate that their own workloads be hosted in data centres rated above three stars (with four recommended) under the scheme, and for the goalposts be moved further – to a minimum of four stars – by 2020.

Providers of cloud and co-location services would also be required, under the proposed recommendations, to publish their own NABERS for data centres rating by 2019.

The report further recommended new building codes be introduced by 2020 to force computer rooms out of office buildings into dedicated facilities, saving a further 3.4 TWh (12.2 PJ) by 2030.

The Department of Industry is accepting feedback on the report until Friday July 18, 2014.