Eftpos gets Square as battle for mobile payments escalates 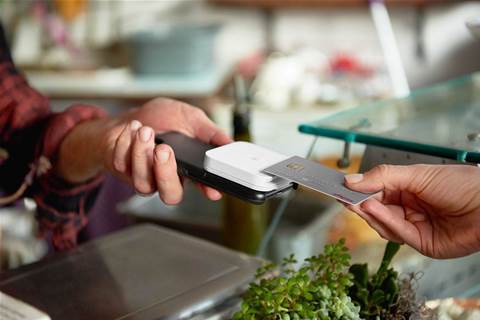 While it might seem like an incremental retrofit, the realpolitik of the eftpos-Squarer hook-up is actually way bigger.

It means an untapped army of smaller merchants – think dog washers, craft brewers, market stallers and school fetes – can now get payments functionality over the counter from Officeworks as opposed to signing-up to a bank’s merchant services contract and bypass credit cards.

Payments industry estimates put Square’s current terminal fleet at around 150,000 units in Australia, a number that has irked many merchant services providers because of its rapid growth over the last two years.

A big factor in the take-up has been the speed with which ABN holders can get up and running because the Square NFC reader, which plugs into a smartphone, has been sold over the counter at Bunnings and Officeworks.

It’s also a come-from-behind effort for eftpos which had lagged the pack in terms of NFC payments, a situation its managing director Stephen Benton is insistent has changed.

“Over the past four years, eftpos Tap & Pay capability has been rolled out to around 30 million cards and 900,000 point of sale terminals across Australia,” Benton said.

“The addition of eftpos functionality to Square devices is a win for millions of Australian eftpos chip cardholders and for Square’s merchants,” Benton said.

“Australian consumers can now select eftpos CHQ or SAV [cheque and savings accounts], and tap eftpos contactless enabled cards when they shop at these businesses, with added benefits such as the ability to track their bank balances in real time.”

However the NFC deal also raises questions about equity of access for non-credit card related contactless payments for services like public transit and parking, where the likes of Visa and Mastercard have dominated in recent years.

The addition of open loop contactless payments to Transport for NSW’s ferry and light rail services notably omitted eftpos, a situation the domestic scheme is known to be trying to address.

Square’s acceptance of eftpos is certain to increase pressure on transit authorities to do the same sooner rather than later rather than relying solely on international providers, especially when most tourists come within Australia.

“We have been humbled by the support we have received from Australia's business community, so we know they will appreciate being able to accept eftpos cards, especially during the busy holiday shopping period.”