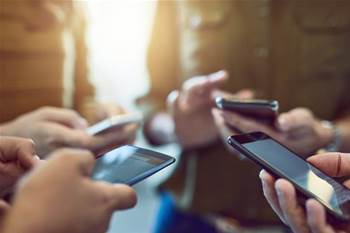 Imbruglio over rash of claims.

Update, 1/4/2020 3pm: This story has developed since initial publication.

The Digital Transformation Agency told iTnews on Wednesday that it is not "collaborating" with ImpactApp.

ImpactApp has also since removed almost all references to the DTA and government from its social media post.

"The representations made in the blog are false. The DTA is not collaborating with Impactapp or Mr Nogueira." the DTA said in a statement.

This statement by ImpactApp referencing the DTA was still on the post at 3pm Wednesday. 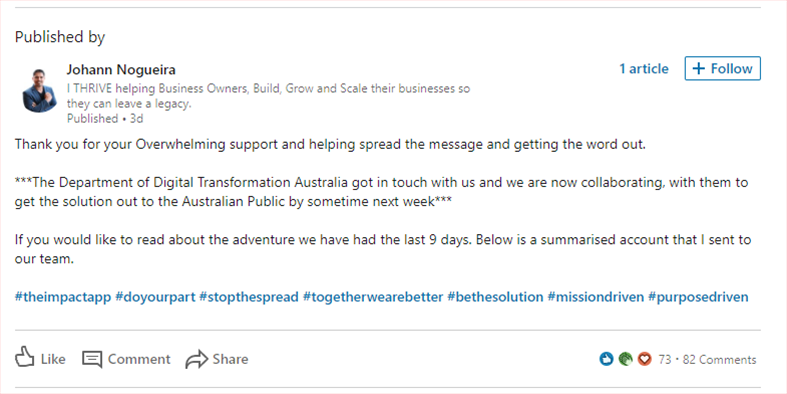 The federal government appears to be in discussions to launch contact tracing functionality in an app as early as this week after picking-up on the work of a privately-developed effort over the weekend.

ImpactApp had been set to launch on Monday this week following a collaborative effort between 30 Australians - including three small businesses - over the past 10 days, according to a social post.

Contact tracing is an emerging surveillance capability being used by governments and health authorities worldwide to track the movements of confirmed COVID-19 cases in a bid to contain the spread of the virus.

The federal government launched a COVID-19 app over the weekend, without contact tracing functionality, but Prime Minister Scott Morrison has previously said that capability was being worked on.

According to the social post, which was published on Saturday, ImpactApp’s creators briefed senior federal and state governments as well as “the heads of some of the biggest tech companies in Australia” on their work late last week.

“The Government’s Digital Transformation Agency got in touch with us and we are now collaborating with them to get the solution out to the Australian public by sometime next week,” Johann Nogueira, director of Melbourne-based management consultancy Business Authorities, wrote on LinkedIn.

Nogueira indicated the team behind the app had been intending to release their app over the weekend before being asked to collaborate.

A site set up to accompany ImpactApp says it uses “encrypted Bluetooth and GPS data to track every interaction you have without exposing anything about you or [another party].”

“When your device is next to any other device, it does a Bluetooth handshake. What this does is if you’ve spent more than 10 minutes with a particular person, it logs an instance,” an instructional video states.

“This creates traceability, so if you come into contact with any people over the next 30 days or so, and someone who you’ve been in touch with has marked themselves as having the COVID-19 virus, you will get an automatic message alerting you to the fact that you have been exposed, therefore you should be going to get tested.

“The data is stored in the cloud in secure servers.”

To date, much of the talk on contact tracing has been focused around the Singapore government’s efforts, called TraceTogether, which similarly uses Bluetooth and location tracking, and which it intends to open source.

Privacy advocates and medical experts have been pushing for Apple and Google to add some sort of contact tracing functionality natively to their operating systems.

“Users who opt in could be notified in a non-identifiable way if they had been in the same spaces as subsequently identified cases, in order to enable self-quarantine, monitoring, early detection and prevention of tertiary cases.

“If such a feature could be built before SARS-CoV-2 is ubiquitous, it could prevent many people from being exposed.

“In the longer term, such infrastructure could allow future disease epidemics to be more reliably contained, and make large scale contact tracing of the sort that has worked in China and Korea, feasible everywhere.”