Dozens of Aussie banks go down after supplier outage 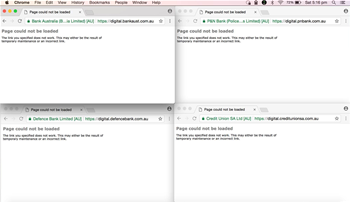 As many as 27 smaller Australian banks and credit unions were offline for much of the weekend after a network outage left their supplier scrambling to restore services.

The affected banks are all customers of Data Action, an Australian banking and IT solutions provider. The list spans the likes of Defence Bank, Bank Australia, Credit Union SA, Qudos Bank, Beyond Bank, P&N Bank, and People's Choice Credit Union, among others.

Services appeared to first fall over early Saturday morning, when many of the banks took to social media to advise customers of an "unexpected issue" with online and mobile banking and their websites.

The issues stretched into Saturday night and early Sunday morning. Systems were restored at around 7am AEDT. Data Action's own website was similarly offline for the same period.

Many of the banks blamed either Data Action or Telstra for the problems, advising their customers that the issues were national and not isolated to the individual bank.

However, later in the day Telstra clarified that the problems did not stem from a Telstra outage, rather a network problem within Data Action's infrastructure.

"Telstra did not have an outage that impacted online banking platforms over the weekend," a spokesperson said.

The affected banks apologised to customers for the disruption.

"We understand that this has caused you an undue amount of stress and inconvenience especially on a weekend and would like to thank you for your patience while it was being rectified," Defence Bank CEO David Marshall said in a statement on Facebook.

"Please be assured we have heard your concerns and will work relentlessly to address this issue with our service provider so that it does not happen again."

Telstra said it was assisting Data Action with the firm's investigation.

Update 1:26pm: Data Action confirmed it suffered a network outage but did not provide the cause.

"We do understand the frustration and stress that this caused our clients and their customers, and for that we are sincerely sorry," a spokesperson said.

Update 4:12pm: To reflect updated attribution of the issue.