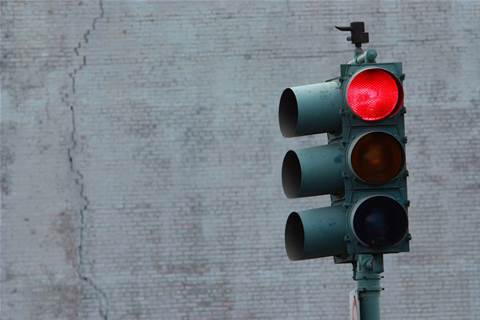 He told the state parliament’s Education and Innovation Committee that out of a total 119 projects listed across all of Queensland’s departments, not one was currently marked red, meaning no current schemes have breached tolerance parameters in terms of budget, quality or timeline, according to the Government's traffic light system.

The vast majority – or 97 – are tracking along fine on green, according to the latest update.

Read what each of the traffic light markers mean here

This represents a major reversal of fortunes in a state which is notorious for its IT failures – and accordingly has raised one or two eyebrows along the way.

The Labor opposition in particular remains sceptical about the rate of change. MPs quizzed IT Minister Ian Walker, Housing Minister Tim Mander and Treasurer Tim Nicholls about puzzling entries from their respective departments during estimates hearings all last week.

“Currently 27 projects reporting significant budget blowouts are still being listed as ‘green’,” a spokesman for the opposition told iTnews.

“According to the Government’s dashboard, a project is listed as green when ‘everything is to plan and the initiatives are within tolerance’. Projects that have had cost blowouts in the millions are clearly not going to plan." 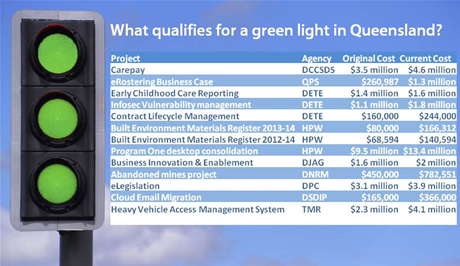 Late on Friday, shadow IT Minister Yvette D’Ath used the Committee’s estimates hearing to quiz Minister Ian Walker and staff from the Department of Science, IT, Innovation and the Arts (DSITIA) on their own Ministerial and Executive Correspondence Solution (MECS).

MECS appears on the dash as running at $349,899, or nearly 40 percent over its original estimated cost, but still retains a green light indicating all is well inside the MECS implementation team.

When challenged by the Labor MP, DSITIA executive Evan Hill explained MECS had been able to get away with a dramatic revision in its budget because “the numbers have been re-estimated” by the project board.

“The project had to be re-baselined as part of the project methodology,” he said. The Minister's office said the business case remained justified so no change was needed.

However this “re-baselining” was highlighted as one of the barriers to transparency by then Government CIO Peter Grant in his 2012 ICT Audit.

“Cost overruns in projects are not always apparent due to regular re-baselining of projects,” he wrote, pointing out that behind this veneer ten percent of significant initiatives he looked at were more than 75 percent beyond their originally approved budget.

Of the 17 projects listed as ‘green’ by DSITIA – the lead agency running the ICT Dashboard – five are over budget to some extent and one has been closed.

When asked by iTnews, Walker could not point to a single set of parameters used to guide agencies where to set the goal posts in terms of the R/A/G ratings.

Health payroll has only just been listed. Read on to find out why...