Domino's pizza AI prepped to go up in flames 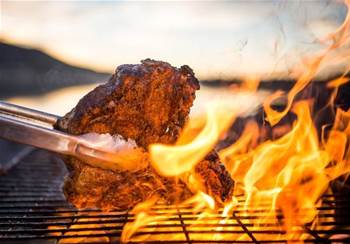 Plant based proteins might be the hot new burger and pizza topping craze on the block, but the age old practice of cooking meat over an open flame is about to become a deadly serious digital affair.

While there’s far scant detail as to whether the robotic vision application can or will be used for the actual cooking and serving of meaty meals, investors have been told the deployment will be based on the ‘Algo Platform’.

But it will also fuse together online order taking, point of sale systems and delivery driver tracking and management that Dragontail is now spruiking as a ‘Total Technology Solution’ that it says makes it four times the recurring monthly SaaS revenue.

Put more simply, what started out as a series of point solutions in the fast food game has now pretty well become an operating system for the quick service food industry all cooked up in Australia that could go global like Domino’s.

While Domino’s has made massive marketing mileage out of the Pizza Checker technology – it’s a staple menu item in investor presentations – in reality Dragontail sells its systems to a bunch of fast food stalwarts including Pizza Hut.

The partnership Domino’s has has clearly been a highly productive one, with the international pie providore now the reference template for heavily digitised stores that run a hyper-efficient model that can churn out more food faster than ever before.

While speed is imperative, so are consistent quality standards that are monitored and controlled by software that automatically measures and scores processes and output.

The Pizza checker function more than a neat gadget too, with scores used to monitor employee performance in terms of quality and speed.

As previously revealed in iTnews, the global chain has even put it to work to quality check the performance of franchises to make sure pizza punters are kept happy and the profits continue to roll in.

The question now is whether the system will work as well for meatheads as it does for pizza lovers.

The Perth-based meatheads at CharGrill Masters reckons it will.

“After being exposed to Dragontail’s technology solution of the Pizza Checker camera at Domino’s Australia, we were very excited to collaborate with Dragontail on this comprehensive solution,” said an unnamed CharGrill Masters official in Dragontail’s statement.

“We are looking forward to having the most advanced state-of-the-art food delivery operation in Perth.”

“We believe that the Total Technology will be the next technology to dominate the QSR world,” Levanon said.