Does Oracle have enough runway to make the clouds? 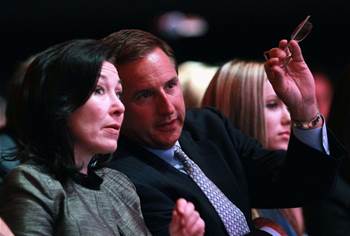 Launching new kit is fun. Explaining to analysts why it isn't selling is no fun at all.

Last week Oracle founder and CEO Larry Ellison launched the company’s new SPARC T5 processor, proudly proclaiming it to be "faster than anything from Intel and IBM".

A week earlier Ellison, along with Oracle co-presidents Mark Hurd and CFO Safra Katz, had a less enjoyable experience explaining to stock analysts why the company missed revenue expectations in the third quarter and suffered an eight percent fall on the stockmarket.

With hardware sales down 16 percent on the previous twelve months and by 25 percent over the last two years, Oracle needs to boost its server revenues which is a tough call in a market that's moving to open source software and generic kit.

Oracle's acquisition of Sun Microsystems three years ago hasn't been a happy experience, with the resultant hardware division steadily shrinking and dragging Oracle's total performance down.

It took a four percent increase in Oracle’s sales and support to existing customers – which represents half of the company’s business – to offset those declines and maintain static sales for the year.

That half of Oracle's revenues come from its existing customer base - and a good chunk of that from services - is a worry for investors. Competing solutions -  some delivered in the cloud, many on open source - provide strong bargaining chips for any license-paying customer.

While Salesforce.com is a minnow compared to Oracle – the cloud provider’s revenue last quarter was less than a tenth of the incumbent’s – its sales have just about doubled in the last two years.

Salesforce, and cloud enterprise software vendor Workday, are enough of a threat to be specifically name-checked by Ellison.

Oracle’s response to that disruption is to beef up its sales teams, which isn’t surprising given Mark Hurd’s background as a salesman.

“We’ve added over 4,000 people to the Oracle sales force in the last 18 months,’ Hurd said during the analyst conference call. “We’ve significantly expanded our customer coverage. We’ve seen material growth in our pipeline. But Q3 were below what we expected, while our actual win rate went up.”

Claiming deals are in the pipeline is a well worn excuse from a sales manager confronted by missed targets, so it was interesting to note the CFO’s perspective.

"What we really saw was the lack of urgency we sometimes see in the sales force, as Q3 deals fall into Q4,"  Oracle CFO Safra Catz said in the same conference call.

"Since we've been adding literally thousands of new sales reps around the world, the problem was largely sales execution, especially with the new reps as they ran out of runway in Q3."

Despite the threats, Oracle still has plenty of runway to use as the business earns over three billion dollars profit each quarter. History is also on Hurd’s side - Oracle usually finish their financial year strongly, having reported 20 percent jumps in final quarter revenue in the last two years.

The challenge is to achieve a bigger final quarter jump in 2013 by growing hardware and cloud revenues while protecting the established revenue streams.

Oracle’s immediate concern is whether the SPARC T5 can arrest the company’s hardware declines.

The longer term question for Oracle is the company’s success in pivoting to services and cloud subscriptions as upstarts nip at the incumbent's heels.