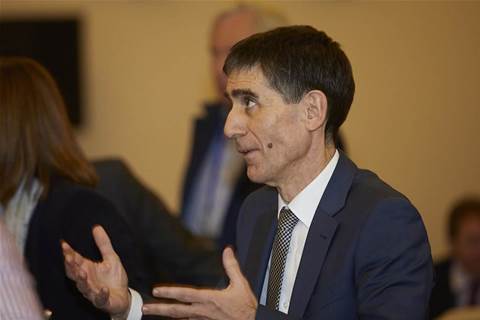 Ready to operate on minister.

The head of the powerful Australian Medical Association has put both the government and opposition on notice it is ready to draw fresh political blood over the escalating privacy row surrounding My Health Record.

Addressing the National Press Club in Canberra on Wednesday, AMA president Tony Bartone said he would do “whatever it takes” to address privacy concerns, including potentially forcing the government to change legislation, to finally make the scheme a practical reality.

The doctor’s group is continuing to firmly back the wider e-health construct, and My Health Record, as it has since its inception which Bartone described as “difficult”.

His support came as Labor leader Bill Shorten called for the My Health Record project to be suspended by the government.

The state of play now is that medicos will endeavour to shave any rough edges off the My Health Record project by camping out in the health minister’s office.

“I will ensure that any ambiguity in the differences between what the legislation says -  and what is the practicality of that interpretation, including [written] assurances provided to the AMA by the government], are crystal clear and there is no ambiguity for our members or the public going forward,” Bartone said.

He added he had sought a meeting with Health Minister Greg Hunt within “days”.

Pressed three times if this meant doctors' support for junking a section of the legislation that may authorise police access to medical records, Bartone held with “whatever it takes”.

Doctors hold the whip hand over both the federal and state politicians on the rollout of both My Health Record and other clinical software and systems. Without their professional association’s support, the technology is effectively dead in the water.

The AMA has previously directly intervened over technical and deficiencies in the e-health scheme which sorely limited its utility, despite systems being hailed as functional by the Health department.

Some of those whom have come off second best to the AMA’s policy therapies include health ministers from both sides, former Department of Health Secretary Jane Halton, vendor IBM and systems integrator Accenture.

While the latest e-health row is certainly not the first or the last, patience is clinicians clearly wearing thin over a chronic inability by the bureaucracy to sell seemingly basic benefits to the community.

The AMA chief was clearly frustrated by both the Australian Digital Health Authority and the government’s botched handling of the information campaign around voluntary opt-out period for the national electronic health record, dryly saying it could have been done better.

However his most unequivocal warning was that the public urgently want and expect progress on using connected technology commonplace elsewhere in the health sector, even with the privacy debate.

“Many, many patients tell me: ‘have you got my records from my recent inpatient stay?’

Bartone said this normally elicited the response of “don’t you get that automatically?”

“To the average patient or punter in the street, they think we are all connected. They’re surprised to hear we are still faxing off referrals to the outpatient clinics.

“Fax …  in this day and age,” Bartone lamented.

He went on to say his general practice patients frequently asked if they could email him, to which he had to say “no, we don’t have a secure messaging environment to facilitate that.”

“We need to move well into the 21st century. We need to make sure we have the enablers,” Bartone said.

The head of the AMA also wants to ensure the last 15 years trying to make e-health a reality doesn’t fall in a heap thanks to legislative over-reach.

“We have come to a tipping point, Bartone said.

“We need to grow the system to a point of maturity so it can develop and become more robust, more informative and allow the patient to control their health journey through this very complex health system.

“Until we have enough people with the record, enough providers uploading information, enough developers with the necessary tools to increase utility, performance … it is going to be stuck at too little, too late.”

Bartone bluntly admitted the e-health journey has been fraught.

“There have been so many barriers, so many issues regarding interoperability, including access to broadband and the state of IT in our hospitals and other parts of the health system.

“The utility hasn’t been there so people haven’t been able to access any reliable information,” he said.