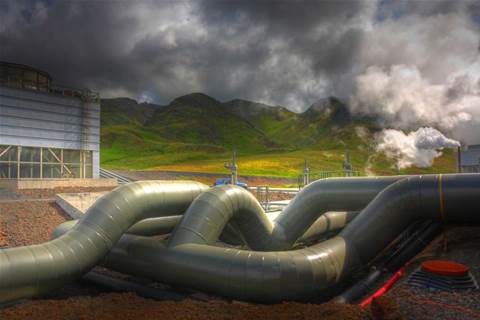 NICTA aims to avoid those costs by combining existing data from industry partners and Geoscience Australia to determine the porosity of rocks in an area and how easily they may be fractured.

Companies could use those properties to assess the economic viability of prospective projects, which generally involve passing water through fractures in the rocks and harnessing resultant steam.

According to project leader and NICTA chief executive officer Hugh Durrant-Whyte, the project could deliver a “value-add” solution to geothermal industry partners within two years.

Durrant-Whyte planned to fuse together and extract information from seismic data, remote sensing imagery and magnetotellurics by adapting techniques that NICTA had developed for biology and underwater terrains.

Like uncovering a terrorist network, no single data source yields the desired result but the whole is more than the sum of its parts.

“The problem is essentially a large-scale data one,” Durrant-Whyte explained. “Australia has a very big competitive advantage in terms of large data sets; a lot of data is held by Geoscience Australia.”

“Getting people who are computer scientists and mathematicians to talk to geologists can be quite challenging,” Durrant-Whyte said, declining to identify NICTA’s partners in the geothermal industry.

“We’re beginning to do preliminary-level work; we’ve been looking at data and have a good plan as to how we’re going to draw it together,” he said.

NICTA plans to dedicate six to 12 of its 100-odd machine learning experts to the project, and make outcomes available “on a non-exclusive basis to all partners”.

Addressing the AIIA national board dinner last week, O’Kane noted that the geothermal industry had “a lot of trouble raising capital”.

The Centre for International Economics (pdf) in 2006 reported that geothermal energy could meet Australia’s total electricity requirements for 450 years.

But “tapping our wonderful geothermal resources in Australia is very expensive,” O’Kane said.

“Those of you who have shares in the geothermal companies will know that they haven’t been paying you back a lot recently,” she said.

“I believe we will get something really powerful out of [the NICTA project], so those of you with geothermal shares, watch this space.”

O’Kane highlighted the CSIRO’s Glass Earth project, which commenced in 1998 and aimed to make the top kilometre of the Australian continent “transparent” to the minerals exploration industry.

The Glass Earth project eventually dissolved due to a lack of tools and data. However, O’Kane and Durrant-Whyte said there was now enough data to support the geothermal project.

“A lot of progress has been made in that area and the second part it: algorithms to data fuse enormous data sets to come up with a reasonable interpretation of what’s going on.”