The slice of support staff in an organisation's overall information technology staffing pie appears to be decreasing, figures from the United States show.

United States based IT metrics company Computer Economics found that while that the deep recession between 2007 and 2009 "barely moved the needle on this function", desktop support staff as a ratio of organisations' overall IT employees dropped from 8.8 per cent in 2011 to 8.1 per cent this year.

However the company adds that the decline could be due to other factors such as hiring in application development, data management and networking rather than desktop support numbers actually dwindling, but nevertheless believes this year's low point marks the beginning of a trend.

Desktop support is measured as encompassing a variety of functions.

"In most companies, these include activities such as building or setting up new machines, initial installation of operating systems and standard application software, applying periodic updates and security patches, replacing and disposing of obsolete equipment, monitoring PC usage, and responding to user-reported incidents involving PC systems," according to Computer Economics. 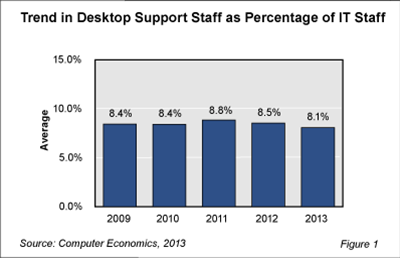 The relative drop could be attributed to the increased reliability of modern computers and, the growing knowledge of users and robust management tools, they said.

Technicians being able to handle support remotely is given as another reason by Computer Economics.

Concurrently, United States job seeker site Indeed.com charts that desktop support salaries are trending downwards severely, having risen in 2011 but then taking a nosedive this year.

MyCareer currently advertises 213 positions for desktop support positions around Australia, most of them in New South Wales, followed by Victoria.

Seek is advertising more than 500 Australian desktop support jobs currently, while Jobisiob has 565 such positions vacant.