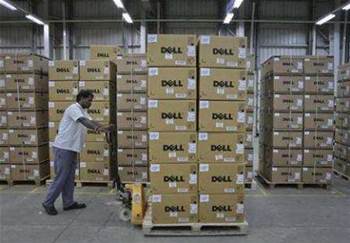 A man pushes a trolley full of Dell computers through a company factory in Sriperumbudur Taluk, in the Kancheepuram district of Tamil Nadu, June 2, 2011. Credit: Reuters/Babu/Files

Michael Dell will take Dell private for US$24.4 billion ($23.4 billion) in the biggest leveraged buyout since the financial crisis, a deal that allows the billionaire chief executive officer to revive the fortunes of his computer company without Wall Street scrutiny.

The deal — announced on Tuesday and financed with cash and equity from Michael Dell, cash from private equity firm Silver Lake, and a US$2 billion loan from Microsoft — will end a rocky 24-year run on public markets for a company conceived in a college dorm room.

To many investors, Dell's decline in market share since its peak in the early 2000s symbolises the rapidly dwindling prospects of the personal computer industry.

The world's No. 3 PC maker, which Michael Dell began in 1984 as a computer-sales outfit while he was still a 19-year-old pre-med student at the University of Texas, is now going through a painful transition from a pure PC maker to a one-stop provider of enterprise computing services. Sales of PCs still make up the majority of its revenue.

Analysts say the restructuring may entail job cuts and more costly acquisitions, as the company arms itself to do battle with larger and more established rivals like HP and IBM.

"We recognise this process will take more time," Chief Financial Officer Brian Gladden told Reuters. "We will have to make investments, and we will have to be patient to implement the strategy.

"And under a new private company structure, we will have time and flexibility to really pursue and realize the end-to-end solutions strategy."

Gladden said the company's strategy would "generally remain the same" after the deal closed, but "we won't have the scrutiny and limitations associated with operating as a public company."

Michael Dell and private equity firm Silver Lake are paying US$13.65 per share in cash for the world's No. 3 computer maker.

Dell, whose fairy-tale rise throughout the 1990s and the early part of the next decade once made it a Wall Street darling, has ceded market share in recent years to nimbler rivals such as Lenovo. That is in spite of Michael Dell's efforts in the five years since he retook the helm of the company following a brief hiatus during which its fortunes waned.

As of 2012's fourth quarter, Dell's share of the global PC market had slid to just above 10 percent from 12.5 percent a year earlier as its shipments dived 20 percent - the fastest quarterly pace of decline in years, according to research house IDC.

While analysts said Dell could be more nimble as a private company, it will still have to deal with the same difficult market conditions. International Business Machines Corp last decade underwent what is considered one of the most successful transformations of a hardware company, all while trading on public markets.

"This is an opportunity for Michael Dell to be a little more flexible managing the company," said FBN Securities analyst Shebly Seyrafi. "That doesn't take away from the fact they will have challenges in the PC market like they did before."

The deal would be the biggest private equity-backed leverage buyout since Blackstone Group's takeout of the Hilton Hotels Group in July 2007 for more than US$20 billion, and is the 11th-largest on record.

The parties expect the transaction to close before the end of Dell's 2014 second quarter, which ends in July.

News of the buyout talks first emerged on January 14, although they reportedly started in the latter part of 2012. Michael Dell had previously acknowledged thinking about going private as far back as 2010.

"The key question here is will shareholders approve this deal, because there is practically no premium where the stock is trading," Sterne Agee analyst Shaw Wu said.