Get ready an 80-core monster machine from Dell. At SC08 yesterday, Michael Dell, Dell’s CEO gave a presentation which included a slide showing an 80 core chip which should tip up sometime around 2010.

It isn’t the first time 80-core processors have come up in conference conversation. A couple of years ago, Intel’s CEO, Paul Otellini, took the opportunity in an IDF keynote to make similar promises of delivering an 80-core processor within the next five years. He had also noted that the chips should be able to swap data at a terabyte a second.

"The x86 revolution continues. You see more and more cores. Increased performance. But also without more power required," said Dell during his keynote yesterday, noting that the trend was to pack more and more computing power into smaller machines, creating desktop sized supercomputers. 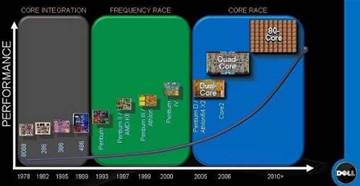 Sun Microsystem’s Rock processor has 16 cores and Intel is rumoured to be planning a 32-core system very soon indeed.

Got a news tip for our journalists? Share it with us anonymously here.
theinquirer.net (c) 2010 Incisive Media
Tags:
80aboutcoredellhardwareprocessortalks