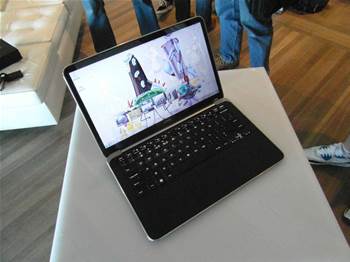 Sales of the XPS 13 ultrabook, which hit store shelves on February 28, are now more than double the company's internal forecast, driven by strong demand from both consumers and big corporations, Dell said.

"With this product, we went aggressive with the forecast,"

Dell product marketing director Alison Gardner said. "Since we started shipping it to customers, XPS 13 has exceeded our expectations."

Almost half of the sales of the XPS 13, which starts at US$999, were to corporations, she added.

Dell's so-called enterprise business has doubled in the past five to six years and now represents half of the company's profit.

While Gardner declined to reveal the exact number of units sold so far or the internal forecast, she said Dell is seeing a lot of sales momentum for the super-thin category of laptops.

Some analysts have said the high price of the laptops, driven up by expensive components such as solid-state drives, may impede sales and force Intel to sacrifice profit margins on its processors to help make them affordable.

Intel, which dubbed them ultrabooks, is providing support by kicking off its biggest marketing push since 2003.

The chip maker's "A New Era in Computing" campaign, which began in April, includes TV and print advertising along with a push in social media.

Clunky laptops are increasingly under threat as tablets grow more powerful and are used for multiple functions, from Web surfing to sophisticated graphics and video manipulation.

Round Rock, Texas-based Dell - which has been waging an uphill battle to diversify its revenue base from PCs to become a larger player in the data centre equipment market and IT services - also plans to launch its first consumer tablet computer in late 2012.