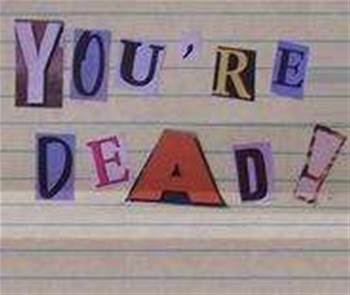 Bruce Blythe is called on by large organisations to calm employees turned hostile.

It is his job to get between the aggressor, their death threats and the victims.

But although his experience in the US Marine Corps allows him to handle crazed staff, he doesn't come across as a tough bloke: he is of average height and build and is polite and calmly spoken.

Blythe's strengths are his silver tongue and intimate knowledge of human psychology, both honed over 20 years including his time as a psychologist at the Corps.

He was involved in some of the US' major crises: he helped manage the fall out of 9/11, the Oklahoma City and 1993 World Trade Centre bombings, and mass murders at the US Postal Office that would later be remembered by the phrase 'going postal'.

For most Australian businesses, death threats are not quite run-of-the-mill. But violent threats from staff are not uncommon, Blythe says.

His secret to handling rogue employees who threaten the life of colleagues or reputation of businesses was "effective communication".

Last year, Blythe used the technique when he was personally threatened during a trip on a New York subway.

"There was this big, mean-looking guy taking up two seats with his arm on a really crowded train ... before I knew it I sat down."

Blythe was threatened after he looked across at the man the wrong way: "He said 'what the **** are you looking at?"

Blythe reverted to his training and replied: "I'm sure you are a good person."

The man relinquished, and dropped his arm.

"You need to show them that you want to understand their situation," Blythe said. "When you push against them, they resist. If you do not push, they have nothing to fight."

Blythe insisted this passive stance works even for staff bent on revenge.

"Get on the phone and talk to them. Ask them what they want ... tell them you will forward their requests and schedule a time to call back. Keep them talking."

He said most staff calmed down after knowing their demands were carried to decision-makers, regardless of the outcome.

Immediately sacking staff who issue threats should be avoided, Blythe said, because the organisation loses control of the individual.

"They may sit at home stewing, making plans," Blythe said. That placed their victims at greater risk because, in Blythe's experience, there may be insufficient evidence for police to intervene.

Sacked staff often took valuable corporate data without the business knowing. Without a job, they were more likely to sell it off.

Even discounting data loss and theft, mismanaged workplace violence could be costly.

David and Ella Van Fleet wrote in The Violence Volcano: Reducing the Threat of Workplace Violence that hidden and delayed costs to organisations are "especially characteristic" of stressed staff.

According to Blythe, staff who were sacked or forced to take leave should be first pointed to examples where their behaviour had breached corporate policy. This meant offenders were less likely to take disciplinary action personally.

Angry staff were not typically violent when they talking, Blythe said.

"Repeat back what you hear the person say to demonstrate your understanding without disagreeing and defer decisions to a later time," he said.