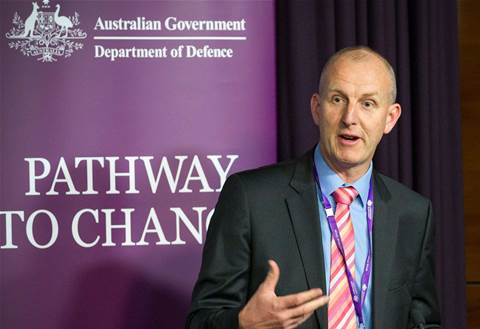 Keeping promises in one of Australia's biggest tech shops.

Defence CIO Peter Lawrence has admitted that one of biggest challenges he faces right now is maintaining the CIOG’s reputation as tech team that can keep its promises.

“The reality is we must deliver on our programs. We can’t lose sight of that,” Lawrence told some 1400 delegates at the sixth annual Military Communications and Information Systems (MilCIS) Conference in Canberra yesterday.

In a frank address the CIO revealed that Defence Secretary Dennis Richardson had chided him over a “a string of examples” where he over-promised and under-delivered.

“Bluntly we have a credibility challenge,” Lawrence said.

“We have to deliver on what we said we would deliver."

One early road block cropped up when the CIO Group was upgrading from Windows XP on the Defence Secret network, and was forced to deal with the growing number of applications that relied on the now unsupported operating system.

“We are now down to 140 as we retired a lot of the applications,” Lawrence said.

He added that he was also facing the need to rationalise 4000 separate applications, each with their own information requirements.

“Nobody in their right mind would run an environment like the one we have got with thousands and thousands of applications,” he said.

However what really keeps Lawrence awake at night is ensuring the Defence network environment remains secure and free from advanced persistent threats.

Security is the one issue Defence Secretary Richardson raises with him “all the time” he said.

He said adversaries are getting smarter with their social engineering tactics, posing an unknown but growing threat to information.

“How do we stay one step ahead of the bad guys?” he asked the crowd.

He conceded that engineered email threats are getting better.

To respond, he has consolidated his security specialists into a new branch to improve their investigation capabilities and collaborate more directly on incidents as they occur.

Lawrence has also ramped up his engagement with vendors through the formation of a Group Commercial Branch.

According to Defence CTO Mohan Alyaswami, the new branch will comprise about 30 staff and be fully functional by the end of the year.

The branch will eliminate the need for vendors to duplicate their engagements with different parts of Defence when it comes to ICT projects.

It will also help to clarify which Defence jobs are the most important in the face of competing priorities.

“We probably have not always been clear enough in indicating the order that we want to undertake certain projects in our portfolio,” Lawrence said.

He hopes the new branch will result in faster decisions as well as improved licensing arrangements.

However he conceded this move may affect the role of Applications Managed Services Partnership Arrangement (AMSPA) established three years ago.

AMSPA is currently being audited and Lawrence said he will clarify its future and how it fits with his view of a ramped up vendor engagement model after the findings are in.