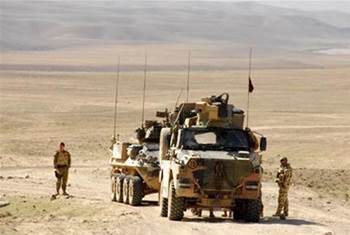 For autonomous operations in rough terrain.

“This technology gives vehicles autonomous enormous capability so that a group of vehicles can move from A to B quite easily,” he said.

“Driving on a highway or cruising around an urban area is one thing, but our technology allows these vehicles to travel off-road in far more complex, unstructured, rough terrain – over river beds and through creeks – even when there’s no markings on the ground.”

The project builds on Nahavandi’s research into robotics and haptics over the past 30 years to provide a “vehicle agnostic” solution that can be retroactively fitted to a range of vehicles including tanks, transporters, trucks and bulldozers.

“Aspects of the bolt-on pack will also have the capability to be used in air and sea domains and the technology can easily be adopted in other non-defence sectors such as transportation and logistics, mining and agriculture, all of which are of immense value to the Australian economy," he said.

The funding deal is part of the federal government’s recent $12.2 million investment into Australian industry to further develop the Army’s experimentation and prototyping of emerging technologies, including autonomous vehicles.

It’s the second contract Defence has signed with the IISRI for the project, bringing the total investment to $6.3 million.

Deakin deputy vice-chancellor, Professor Julie Owens, said the university is extending a partnership with the Australian Defence Force that was initiated in 2006 to provide defence with access to emerging technology.