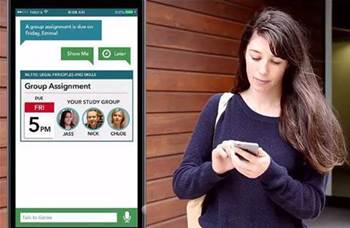 Deakin University is spinning out a technology start-up to sell products developed within the university's IT team to the wider public.

Chief digital officer William Confalonieri has been given approval to lay out his roadmap for a new start-up that will market his team’s Genie virtual assistant and Scout internet-of-things location-based service.

A working prototype of the Genie platform debuted in late 2016, and it launched fully in August this year. It consists of a suite of chatbots, artificial intelligence, voice recognition, and a predictive analytics engine to allow students to keep track of their campus lives.

The platform was built by Deakin’s internal IT team using a combination of vendor products, their own code, and integrations. It has been bundled into the Deakin iOS and Android mobile app to serve as a personal assistant to students.

The Scout platform taps into the sensors and beacons installed around Deakin’s campuses to provide students with information related to their location, like food and drink specials when a student passes the cafeteria.

Confalonieri said he had been approached by other organisations about the Genie and Scout services.

"The intention is to grow the company until it becomes a serious player in emerging technologies, delivering substantial benefits to Deakin and partners," he told iTnews.

Confalonieri said he already had three alpha customers in finance, health and government ready to go.

For the next few months any Genie and Scout services delivered to external clients will be done from within Deakin University while the structure of the yet-to-be-named start-up is formed.

Deakin is likely to avoid offering the products to its local competitors, Confalonieri said. The start-up is expected to grow to include products other than Genie and Scout as they are developed.

The number of staff that move over to the start-up from Deakin - or that are freshly employed to it - will be determined by the level of activity between now and when the entity becomes operational in the first half of next year.